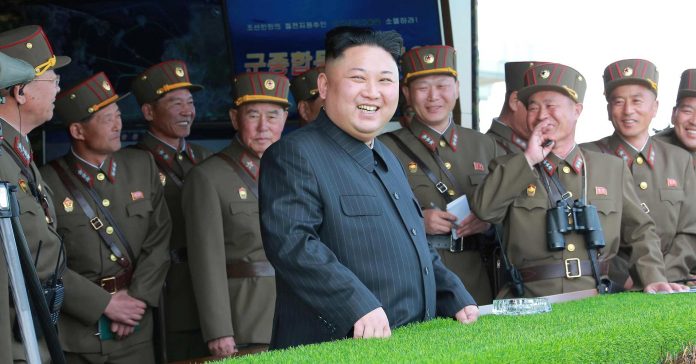 Trump’s willingness to sit down with Kim takes on even greater significance when contrasted with Trump’s aggressive treatment of Iran—a country that agreed, at the negotiation table, to halt its nuclear weapons program and accept an aggressive monitoring regime.

Neither Kim’s father nor his grandfather was able to score a face-to-face with a U.S. president, and now, mere months after the North Korean government announced its ability (albeit unverified) to reach the United States with a nuclear-tipped missile, President Trump has agreed to a meeting.

This amounts to tacit acceptance of North Korea’s recent actions as a risk having been worth taking; it has been rewarded with what sounds awfully like a meeting between equals. The problem with this is not merely one of perception: consider how much harder it will now be for the North Koreans to accept a future without nuclear weapons. Consider also how other international actors might be tempted to rethink their own stance on nuclear weapons.

But President Trump’s willingness to meet Kim Jong Un is an especially costly move for yet another, more imminent reason. If there was one thing that Kim wanted more this year than a propaganda win or the acceptance by Trump of North Korea as a nuclear power, it was time. This has been Kim’s top priority since at least the start of 2018.

The sudden willingness to engage with South Korea, to participate in the Olympics, and to invite a delegation from the South to meet with Kim himself—all of these actions were initiated after Trump’s war rhetoric reached its maximal pitch and there was the perceived risk of a preemptive attack by the United States.

The goal was to lower the temperature long enough so that things do not get out of hand before North Korea is fully prepared. Can’t North Korea already retaliate militarily and cause massive damage to U.S. interests? Undoubtedly, yes. But has North Korea achieved an optimal deterrent and a second-strike capability that can effectively target the United States itself? By most accounts, it has not, and this is precisely what Kim would like to achieve before matters come to a head—either at the negotiation table or when negotiations fail.

The offer to meet a few months hence, now that it has been accepted, gives that much more time for Kim to achieve this objective. If it does not buy enough time, or if the proposed meeting gets cancelled in the coming weeks—which I consider to be a highly likely scenario—you can be sure there will be another such move by North Korea.

As a strong supporter of negotiation and diplomacy even when things seem impossible, I am in favor of creating a process (with properly curated and coordinated public and private channels) that brings the United States and North Korea to the table. The stakes are too high not to do so. However, I am confident that this could have been achieved without President Trump so enthusiastically accepting a meeting with Kim this early in the process, and it could have been done at significantly lower strategic cost.

Commentary by Deepak Malhotra, a professor at Harvard Business School and the author of Negotiating the Impossible. Follow him on Twitter @
Prof_Malhotra.