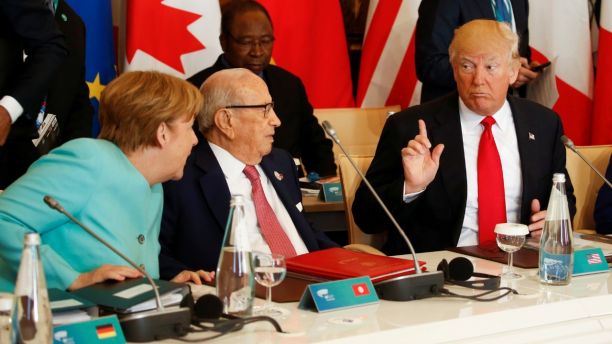 Germany and the U.S. emerged from Memorial Day weekend in a war of words, as Chancellor Angela Merkel and her coalition partners attacked America’s reliability as a world power and President Trump fired back on Twitter.

Merkel said at a beer tent rally in Munich Sunday that Germany cannot “fully rely” on the U.S., and that continental Europe “really must take our fate into our own hands.”

“The chancellor represents all of us at summits [NATO and G7] like these,” said Schultz, seen as a challenger to Merkel in the upcoming September election. “I reject with outrage the way this man takes it upon himself to treat the head of our country’s government.”

Trump countered on Tuesday, renewing his allegation Germany doesn’t pay its full, 2 percent of GDP share toward defense — a requirement of NATO membership. He also rapped the European economic powerhouse for its trade policies.

“We have a MASSIVE trade deficit with Germany, plus they pay FAR LESS than they should on NATO & military,” Trump tweeted. “Very bad for U.S. This will change”

Economists agree with Trump that the U.S. trade gap favors Germany by $67.8 billion per year. That trade deficit is the second largest after China’s $310 billion advantage over the U.S.

Trump has confronted Merkel over her country’s failure to meet the NATO guidelines for defense expenditures. Germany is one of the 23 NATO members that has not met the 2 percent goal of defense spending. The European economic powerhouse ranked 15th among NATO members, spending a mere 1.2 percent of its gross national product on military defense.

MERKEL: EUROPE MUST STAY UNITED IN FACE OF ALLY UNCERTAINTY

It is not the first time that anti-American rhetoric has played a role in a German election campaign. Former social democratic Chancellor Gerhard Schröder mobilized voters around anti-American sentiments to win the 2002 election. In his memoir, “Decision Points,” President George W. Bush accused Schröder of reneging on German support for the U.S. in the Iraq war. That touched off a war of words between Bush and Germany’s then justice minister.

When he was foreign minister, Germany’s current social democratic president, Frank-Walter Steinmeier, called Trump a “hate preacher.” Steinmeier’s successor as foreign minister, the social Democrat Sigmar Gabriel, has pivoted away from the U.S and toward the Islamic Republic of Iran. Just days after the U.S and other world powers reached a nuclear deal with Iran in 2015 to curb its atomic program, Gabriel went to Iran with a delegation of business leaders. He made a second trip last year to jump-start business deals with Iran.

This past week, Gabriel was engulfed in scandal after inviting a hard-line anti-Western, anti-U.S. Iranian cleric to the foreign ministry for a conference promoting religious peace. The extremist Iranian religious leader Hamidreza Torabi, a key organizer of the Quds event in Berlin, an anti-Western rally calling for the destruction of the Jewish state, appeared at the foreign ministry event.

Torabi sponsors buses for pro-Hezbollah and pro-Iranian regime activists to travel to Quds, which also serves as a gathering spot for boycott campaigns against Israel.

Although the U.S. has designated Hezbollah as a terrorist organization, Merkel has declined to outlaw the Lebanese militant group. There are 950 active members and supporters of Hezbollah in Germany.

The Israeli Embassy told Fox News that Germany should have never invited Torabi to the conference.

“Any person who incites violence has no place in a dialogue that uses religions as a bedrock to bring peace, tolerance and understanding between people, nations and religions,” the ministry said. “Moreover, there is no doubt that a person who incites violence against Israel and Jews in the name of God, in the city of Berlin, has no place in such a dialogue, certainly not one organized by the German government.”

Torabi, who heads the Islamic Academy of Germany, held a poster in downtown Berlin at the 2016 anti-Israel Quds rally urging the “rejection of Israel” and terming the Jewish state “illegal and criminal.”

Benjamin Weinthal reports on human rights in the Middle East and is a fellow at the Foundation for Defense of Democracies. Follow him on Twitter @BenWeinthal