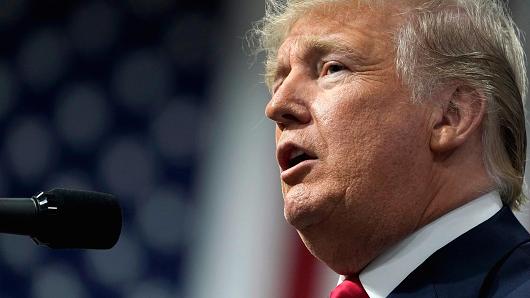 President Donald Trump on Tuesday said his new national security strategy recognizes that space is a theater of war, and he floated the idea of creating a Space Force, a branch of the military that would operate outside of earth’s atmosphere.

“Space is a war-fighting domain, just like the land, air, and sea,” Trump told a an audience of service members at the Marine Corps Air Station Miramar. “We may even have a Space Force, develop another one, Space Force. We have the Air Force, we’ll have the Space Force.”

The president described how he’d originally coined the term as a joke, while discussing U.S. government spending and private investment in space. “I said, ‘maybe we need a new force, we’ll call it the Space Force,’ and I was not really serious. Then I said, ‘what a great idea,’ maybe we’ll have to do that,” Trump told the crowd of Marines.

“So think of that, Space Force,” Trump continued, “because we are spending a lot and we have a lot of private money coming in, tremendous. You saw what happened the other day, and tremendous success. From the very beginning, many of our astronauts have been soldiers and air men, coast guard men and marines. And our service members will be vital to ensuring America continues to lead the way into the stars.”

It was unclear whether the president was still joking by the time he finished his off script remarks about a Space Force. The White House did not respond to a request for comment.