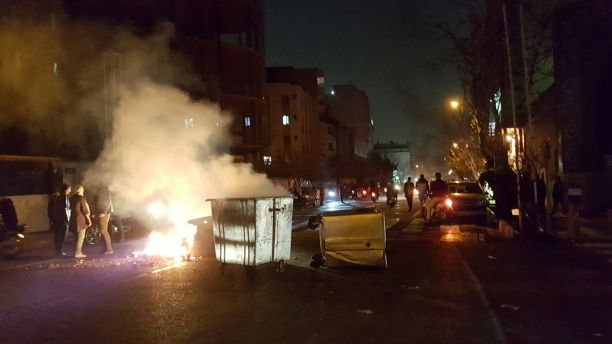 President Trump fired back Sunday at Iranian President Hassan Rouhani, who’d broken his silence on rare, widespread and deadly protests breaking out inside the Islamic Republic.

“Iran, the Number One State of Sponsored Terror with numerous violations of Human Rights occurring on an hourly basis, has now closed down the Internet so that peaceful demonstrators cannot communicate. Not good!” Trump tweeted.

It may have been a reference to Rouhani’s jab earlier in the day, when he said Trump “has forgotten that he had called Iranian people ‘terrorists’ a few months ago.”

Rouhani also said in his speech Sunday night — his first since the protests first broke out Thursday — that people have the right to demonstrate, but those demonstrations should not make the public “feel concerned about their lives and security.”

Earlier Sunday, Trump tweeted that Iranians were “finally getting wise as to how their money and wealth is being stolen and squandered on terrorism.

“Looks like they will not take it any longer,” Trump wrote. “The USA is watching very closely for human rights violations!”

Rouhani’s comments came hours after two protesters were killed at a rally.

The deaths were the first of the demonstrations, which appear to be the largest to strike Iran since the protests that followed the country’s disputed 2009 presidential election. Thousands of people have taken to the streets.

“On Saturday evening, there was an illegal protest in Dorud and a number of people took to the streets responding to calls from hostile groups, leading to clashes,” said Habibollah Khojastehpour, the deputy governor of the western Lorestan province, according to Sky News. “Unfortunately in these clashes two citizens from Dorud were killed.” 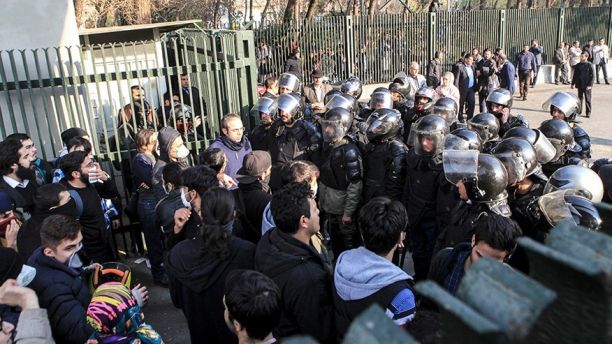 Dec. 30, 2017: In this photo taken by an individual not employed by the Associated Press and obtained by the AP outside Iran, anti-riot Iranian police prevent university students from joining other protesters in Tehran, Iran.

Khojastehpour told state television that “no shots were fired by the police and security forces” and “foreign agents” and “enemies of the revolutions” were to blame.

A Revolutionary Guard Telegram channel blamed the deaths on “people armed with hunting and military weapons” who “entered the protests and started shooting randomly toward the crowd and the governor’s building,” according to Sky News, adding that six people also were wounded.

Videos circulating on social media late Saturday appeared to show fallen protesters in Doroud as gunshots sounded in the background, although the footage could not be independently confirmed.

The killings came as interior minister Abdolrahman Rahmani Fazli warned Iranians about participating in the protests.

“Those who damage public property, disrupt order and break the law must be responsible for their behavior and pay the price,” Sky News quoted Fazli as saying early Sunday on state television.

The CEO of the popular messaging app Telegram, which protesters have used to plan and publicize demonstrations, according to the Associated Press, said Sunday that Iran has been “blocking access… for the majority of Iranians.” Iranians said the app is now inaccessible by mobile phone networks.

State TV also said Instagram use has been “temporarily limited.”