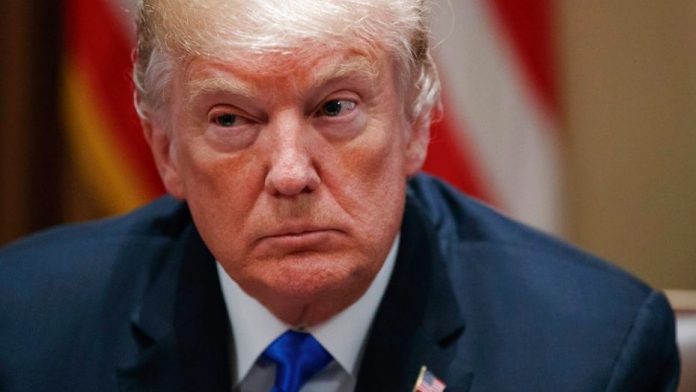 In this Feb. 28, 2018 photo, President Donald Trump pauses during a meeting in the Cabinet Room of the White House, in Washington, with members of congress to discuss school and community safety.

President Trump, whose frenetic style of governing has become perhaps his defining media image, could be facing a turning point in the coming weeks.

If he can get results, it would go a long way toward quieting the complaints about the zig-zag nature of his policymaking. If he falls short, his detractors will say he’s merely running a reality TV show.

His is an unconventional negotiating style, to say the least, maybe not in real estate but in the political world. He keeps everyone off balance. Sometimes his allies aren’t sure whether they can depend on him.

The president yesterday pushed back against the media’s “chaos” narrative, tweeting: “The new Fake News narrative is that there is CHAOS in the White House. Wrong! People will always come & go, and I want strong dialogue before making a final decision. I still have some people that I want to change (always seeking perfection). There is no Chaos, only great Energy.”

But that energy often creates sparks around the White House.

Trump surprised his own staff by announcing he’ll slap tariffs on steel and aluminum, despite the opposition of his chief economic adviser, Gary Cohn, who resigned yesterday (adding to the appearance of chaos). Many free-trade Republicans on the Hill also hate the tariffs, and after an outcry from Paul Ryan and company, Trump is sending signals that some industries could be exempt.

And while the president generated outrage in Canada and Mexico, he may give them a pass if they renegotiate parts of NAFTA.

So was taking a maximalist position crazy, or a way to seize more leverage?

The same goes for North Korea’s surprising signal yesterday that it is willing to suspend its nuclear testing in exchange for talks with the administration. Now this may, of course, merely be a tactical move on the part of Kim Jong-un.

But given the thunderous criticism that Trump took for his Twitter taunts against “little rocket man,” it would be striking if that—and sanctions—forced Kim to the table.

Trump put gun legislation at the top of the national agenda by responding to the Florida school shooting with demands for action and no fewer than three televised sessions on the emotional subject.

He has been playing the bipartisan power broker searching for common-sense solutions. He has seemed to side with Democrats on tightening background checks and age limits for certain weapons, even taunting Republican lawmakers by asking whether they’re “terrified” of the NRA.

The president has twice met with NRA leaders during this process, and it’s not clear whether he’s pulling back on his proposals or just vouching for the group’s patriotism.

If Trump can bring along enough Republicans to pass even modest measures, he will have accomplished something that Barack Obama could not.

But if it’s all for naught—and Congress has been a bulwark against any gun measures—Trump will have failed the test he devised for himself.

Television will replay the clips where he said action was urgent, that sometimes leaders have to disagree with the NRA, that he was determined to prevent more mass shootings.

And the president’s critics will say it was all for show, just like on immigration.

There too, at a televised session, Trump said he’d be willing to take the heat from both sides. There, too, he insisted he wanted to help the dreamers in exchange for a border wall and revamping the immigration system.

There, too, he basked in the favorable media attention about his dealmaking with Chuck and Nancy.

But in the end the president seemed to back off the compromise proposal—Democrats have also dug in on their demands—and nothing, so far, has been done.

It’s no secret that the press and official Washington doesn’t like Trump’s style. They prefer consistent politicians who quietly hammer out agreements behind closed doors.

Putting the talks on camera, though, is a more transparent way of doing business, even if it invites more posturing.

But in the end we measure our presidents by results. If the man who wrote “The Art of the Deal” can’t close some of these deals, he’ll be dismissed mainly as a television performer.

Compromise may be a dirty word in Washington these days, but that’s what it takes to get something done.