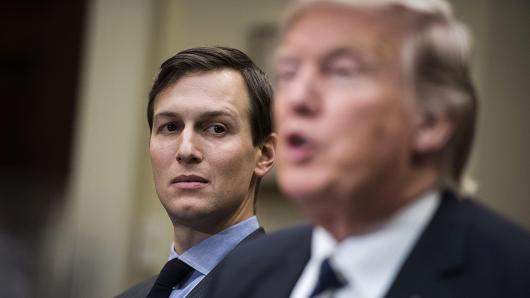 Jared Kushner, senior adviser to President Trump, listens to President Trump during a listening session with cyber security experts in the Roosevelt Room the White House in Washington, DC on Tuesday, Jan. 31, 2017.

Trump’s visit to the Middle East and Europe were widely perceived as diplomatic successes, but as he returns to the White House, his problems are mounting. Late last week, reports surfaced that Trump’s top advisor and son-in-law Jared Kushner was a target of investigators probing Russia’s influence in the 2016 election.

Yet in a blizzard of tweets on Sunday, the president denounced the media’s use of unnamed sources as “fake news,” and again took aim at reporters as “the enemy.”

It is my opinion that many of the leaks coming out of the White House are fabricated lies made up by the #
FakeNewsmedia.

“Whenever you see the words ‘sources say’ in the fake news media, and they don’t mention names… it is very possible that those sources don’t exist but are made up by fake news writers,” the president tweeted. “Fake news is the enemy!”

As a result of the sense of crisis enveloping the Oval Office, Trump is said to be weighing changes at the uppermost ranks of the White House.

Meanwhile, Trump also addressed a controversy that arose last week, when British authorities publicly complained that U.S. officials had leaked sensitive information about the bomber who killed more than 20 people at a Manchester concert.

In recent days, Trump and administration officials have condemned the disclosure of sensitive information, with Homeland Security chief John Kelly telling NBC’s “Meet the Press” the leaks were “damn close to treason.”

British Prime Minister May was very angry that the info the U.K. gave to U.S. about Manchester was leaked. Gave me full details!