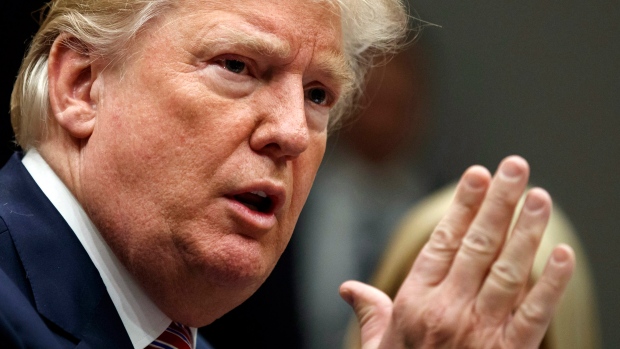 The White House on Sunday pledged to help states pay for firearms training for teachers and reiterated its call to improve the background check system as part of a new plan to prevent school shootings in the U.S.

But in a move sure to please the gun lobby, the plan does not include a push to increase the minimum age for purchasing assault weapons to 21, which President Donald Trump had repeatedly championed.

Instead, a new federal commission on school safety will examine the age issue, as well as a long list of others topics, as part of a longer-term look at school safety and violence.

The plan forgoes an endorsement of comprehensive background checks for gun purchases, which the president, at times, seemed to embrace.

In a call with reporters Sunday evening, administration officials described the plan as a fulfilment of Trump’s call for action in the wake of the school shooting in Parkland, Fla., last month that left 17 dead.

“Today we are announcing meaningful actions, steps that can be taken right away to help protect students,” said Education Secretary Betsy DeVos, who will chair the commission.

DeVos said that “far too often, the focus” after such tragedies “has been only on the most contentious fights, the things that have divided people and sent them into their entrenched corners.” She described the plan as “pragmatic.”

The plan was immediately panned by gun control advocates, including the Brady Campaign to Prevent Gun Violence. “Americans expecting real leadership to prevent gun violence will be disappointed and troubled by President Trump’s dangerous retreat from his promise,” said Avery Gardiner, the group’s co-president.

‘An insult to the victims of gun violence’

Sen. Bob Casey, Democrat of Pennsylvania, called the plan “weak on security and an insult to the victims of gun violence.” In a statement, he added, “When it comes to keeping our families safe, it’s clear that President Trump and Congressional Republicans are all talk and no action.”

The plan is less ambitious than the changes Trump advocated in a series of listening sessions in the weeks after the massacre. In televised meetings with lawmakers, survivors of recent school shootings and the families of victims, Trump made a strong case for arming teachers, but also increasing the age for purchasing long guns.

“I mean, so they buy a revolver — a handgun — they buy at the age of 21. And yet, these other weapons that we talk about … they’re allowed to buy them at 18. So how does that make sense?” he told school officials last month. “We’re going to work on getting the age up to 21 instead of 18.”

White House spokesperseon Raj Shah had said earlier Sunday in an interview with ABC’s This Week that “the president has been clear that he does support raising the age to 21” and that that would be a “component” of the announcement.

Trump mocks commissions, then strikes one

But Trump has also spoken repeatedly in recent weeks with the heads of the powerful National Rifle Association, which considers increasing the age of purchase to be an assault on the Second Amendment. The NRA on Friday sued Florida over a new gun law signed by Republican Gov. Rick Scott that bans the purchase of firearms by anyone under the age of 21.

Instead, the issue will be one of a list of topics to be studied by the DeVos commission, which will then provide recommendations to the president. Administration officials said they had not set a deadline for the commission’s recommendations, but expected they’d made in under a year.

Rifles are shown for sale at a sports store in New Castle, Pa. Trump called on states to pass temporary, court-issued Risk Protection Orders, which allow law enforcement to confiscate guns from individuals who pose risks to themselves and others, and temporarily prevent them from buying firearms. (Keith Srakocic/Associated Press)

Trump’s embrace of another commission appears at odds with comments he made Saturday night mocking their use, at least when it comes to fighting drug addiction.

During the meetings, Trump also advocated arming certain teachers and school staffers, arguing that gun-free schools are “like an invitation for these very sick people” to commit murder.

“If you had a teacher who was adept at firearms, they could end the attack very quickly,” he has said.

Firearms training for for school personnel

The White House has directed the Justice Department to help states partner with local law enforcement to provide “rigorous firearms training to specifically qualified volunteer school personnel,” said Andrew Bremberg, director of the president’s Domestic Policy Council. The White House did not immediately say how much money would be made available.

Trump also called on states to pass temporary, court-issued Risk Protection Orders, which allow law enforcement to confiscate guns from individuals who pose risks to themselves and others, and temporarily prevent them from buying firearms. And he called for the reform and expansion of mental health programs, as well as a full audit and review of the FBI tip line. The bureau has been criticized for not following up on warnings about the suspect in the Parkland school shooting.