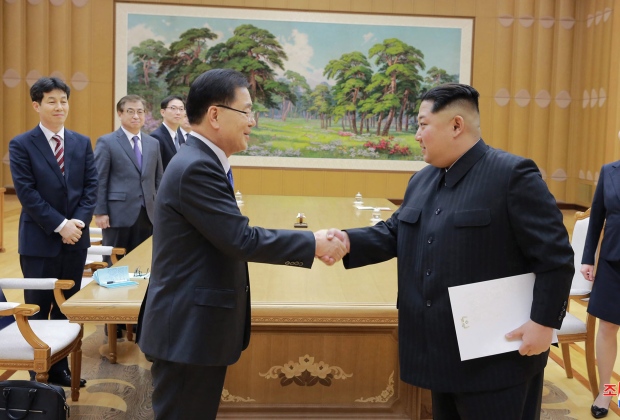 U.S. President Donald Trump says he is prepared to meet North Korea’s Kim Jong-un, in what would be the first face-to-face encounter between leaders from the two countries and could mark a breakthrough in a standoff over the North’s nuclear weapons.

Kim had “committed to denuclearization” and to suspending nuclear and missile tests, South Korea’s National Security Office head Chung Eui-yong told reporters at the White House on Thursday after briefing Trump on a meeting South Korean officials held with Kim earlier this week.

Kim and Trump have engaged in an increasingly bellicose exchange of insults over the North’s nuclear and missile programs, which it pursues in defiance of UN Security Council resolutions, before an easing of tension coinciding with last month’s Winter Olympics in the South.

“A meeting is being planned,” Trump said on Twitter after speaking to Chung, setting up what would be his biggest foreign policy gamble since taking office in January 2017.

Kim Jong Un talked about denuclearization with the South Korean Representatives, not just a freeze. Also, no missile testing by North Korea during this period of time. Great progress being made but sanctions will remain until an agreement is reached. Meeting being planned!

Chung said Trump agreed to meet by May in response to Kim’s invitation. A senior U.S. official said later it could happen  “in a matter of a couple of months, with the exact timing and place still to be determined.”

Both Russia and China, who joined years of on-again, off-again “six-party” talks, along with the United States, the two Koreas and Japan, aimed at ending the standoff, welcomed the new, positive signals after months of deteriorating relations between North Korea and the United States.

A spokesperson for Foreign Affairs Minister Chrystia Freeland’s said in a statement that Canada has “always believed that a diplomatic solution to the North Korean nuclear crisis is essential and possible.”

Canada and the U.S. recently co-hosted a summit in Vancouver to discuss efforts to find a peaceful path to deal with North Korea’s nuclear and ballistic weapon programs.

Saša Petricic gives us South Korea mixed reaction to the upcoming meeting of Trump and Jong-un.1:39

Trump has derided the North Korean leader as a “maniac,” referred to him as “little rocket man” and threatened in a speech to the United Nations last year to “totally destroy” Kim’s country of 26 million people if it attacked the United States or one of its allies.

South Korean President Moon Jae-in, who led the pursuit of detente with North Korea during his country’s hosting of the Winter Olympics, said the summit would set a course for denuclearization, according to a presidential spokesperson.

Trump had agreed to meet Kim without any preconditions, another South Korean official said.

Asian stock markets rose on the news, with Japan’s Nikkei ending up 0.5 per cent and South Korean stocks more than one per cent higher. The U.S. dollar also rose against the safe-haven Japanese yen.

“It’s good news, no doubt,” said Hong Chun-Uk, chief economist at Kiwoom Securities in Seoul. “But this will likely prove to be only a short-lived factor unless more and stronger actions follow.”

Trump had previously said he was willing to meet Kim under the right circumstances but had indicated the time was not right for such talks. He mocked U.S. Secretary of State Rex Tillerson in October for “wasting his time” trying to talk to North Korea.

Tillerson said earlier on Thursday during a visit to Africa that, although “talks about talks” might be possible with Pyongyang, denuclearization negotiations were likely a long way off.

“Kim Jong Un talked about denuclearization with the South Korean Representatives, not just a freeze,” Trump said on
Twitter on Thursday night. “Also, no missile testing by North Korea during this period of time. Great progress being made but sanctions will remain until an agreement is reached.”

A meeting between Kim and Trump, whose exchange of insults had raised fear of war, would be a major turnaround after a year in which North Korea has carried out a battery of tests aimed at developing a nuclear-tipped missile capable of hitting the U.S. mainland.

‘What is new isn’t the proposal, it’s the response.’
– Daniel Russel, former U.S. assistant secretary of state for East Asia and the Pacific

Trump’s aides have been wary of North Korea’s diplomatic overtures because of its history of reneging on international commitments and the failure of efforts on disarmament by previous U.S. administrations.

South Koreans responded positively to the news, with online comments congratulating Moon for laying the groundwork for the Trump-Kim talks. Some even suggested Moon should receive the Nobel Peace prize, although scepticism over previous failed talks remained.

North and South Korea, where the United Sates stations 28,500 troops, are technically still at war after their 1950-53 conflict ended in a ceasefire, not a truce.

Daniel Russel, until last April the assistant secretary of state for East Asia and the Pacific, the most senior U.S. diplomatic position for Asia, said he wanted to see detail and hear from North Korea on the plans.

“Also remember that [North Korea] has for many years proposed that the president of the United States personally engage with North Korea’s leaders as an equal — one nuclear power to another,” he said. “What is new isn’t the proposal, it’s the response.”

A senior administration official told Reuters that Trump agreed to the meeting because it “made sense to accept an invitation to meet with the one person who can actually make decisions instead of repeating the sort of long slog of the
past.”

“President Trump has made his reputation on making deals,” the official said.

“A word of warning to North Korean President Kim Jong Un — the worst possible thing you can do is meet with President Trump in person and try to play him,” Graham said on Twitter. “If you do that, it will be the end of you — and your regime.”

Some U.S. officials and experts worry North Korea could buy time to build up and refine its nuclear arsenal if it drags out
talks with Washington.

In what would be a key North Korean concession, Chung, the South Korean official, said Kim understood that “routine” joint military exercises between South Korea and the United States must continue.

Pyongyang had previously demanded that such joint drills, which it has said it sees as a preparation for invasion, be suspended in order for any U.S. talks to go forward.

Tensions over North Korea rose to their highest in years in 2017 and the Trump administration warned that all options were on the table, including military ones, in dealing with Pyongyang. 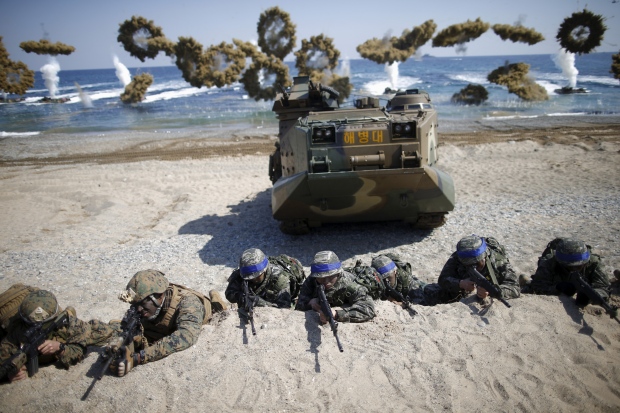 Signs of a thaw emerged this year, with North and South Korea resuming talks and North Korea attending the Winter Olympics. During the Pyongyang talks this week, the two Koreas agreed on a summit in late April, their first since 2007.

Japanese Prime Minister Shinzo Abe and Trump, in a call on Thursday, vowed to continue to enforce sanctions until Pyongyang took “tangible steps … toward denuclearization,” the White House said in a statement late Thursday.

“Japan and the United States will not waver in their firm stance that they will continue to put maximum pressure until North Korea takes concrete action toward the complete, verifiable and irreversible end to nuclear missile development,” Abe told reporters in Tokyo.