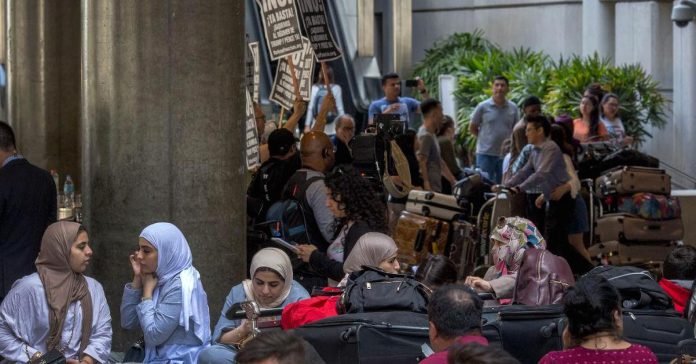 On Thursday evening, the state of Hawaii asked a federal judge in Honolulu to determine whether the Trump administration had interpreted the court’s decision too narrowly.

Hawaii said in a court filing that the U.S. government intended to violate the Supreme Court’s instructions by improperly excluding from the United States people who actually have a close family relationship to U.S. persons, echoing criticism from immigrant and refugee groups.

Hawaii called the refusal to recognize grandparents and other relatives as an acceptable family relationship “a plain violation of the Supreme Court’s command.”

Karen Tumlin, legal director of the National Immigration Law Center, said the administration’s guidance “would slam the door shut on so many who have waited for months or years to be reunited with their families.”

Asked how barring grandparents or grandchildren makes the United States safer, a senior U.S. official did not directly answer, but instead pointed to Trump’s guidance to pause “certain travel while we review our security posture.”

The U.S. government expects “things to run smoothly” and “business as usual” at U.S. ports of entry, another senior U.S. official told reporters.

The administration said that refugees who have agreements with resettlement agencies but not close family in the United States would not be exempted from the ban, likely sharply limiting the number of refugees allowed entry in coming months.

Trump first announced a temporary travel ban on Jan. 27, calling it a counterterrorism measure to allow time to develop better security vetting. The order caused chaos at airports, as officials scrambled to enforce it before being blocked by courts. Opponents argued that the measure discriminated against Muslims and that there was no security rationale for it.

A revised version of the ban was also halted by courts.

The State Department guidance, distributed to all U.S. diplomatic posts on Wednesday evening and seen by Reuters, fleshed out the Supreme Court’s ruling about people who have a “bona fide” relationship with an individual or entity in the United States.

It defined a close familial relationship as being a parent, spouse, child, adult son or daughter, son-in-law, daughter-in-law or sibling, including step-siblings and other step-family relations.

The guidelines also said that workers with offers of employment from a company in the United States or a lecturer addressing U.S. audiences would be exempt from the ban, but that arrangements such as a hotel reservation would not be considered bona fide relationships.