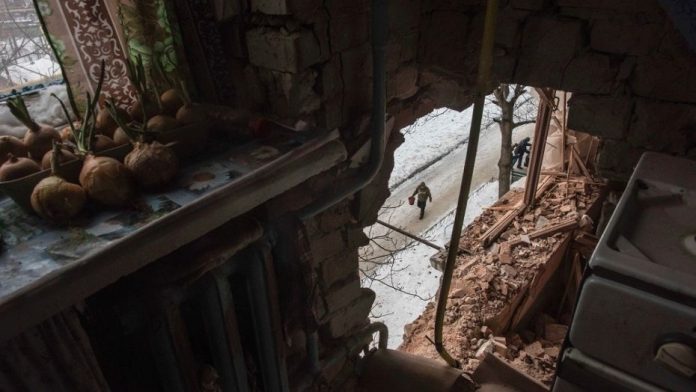 A local resident walks past an apartment building damaged by shelling in Avdiivka, Ukraine, Feb. 4, 2017.

The Trump administration has approved the sale of lethal arms to the western-aligned government of Ukraine for its battle against pro-Russian separatists in the eastern provinces.

Wednesday’s move was in stark contrast to the Obama administration, which denounced Russian aggression but refused to sell lethal arms to Ukraine.

Politicians were divided on the move, with some praising it as long overdue, while others raised concerns that it will complicate any efforts to work with Russia.

In a statement to the Washington Post, Senate Foreign Relations Committee Chairman Bob Corker, R-Tenn., referenced the Ukraine Freedom Support Act of 2014, which authorized the transaction.

“I’m pleased the administration approved the sale of defensive lethal arms to Ukraine. This decision was supported by Congress in legislation that became law three years ago and reflects our country’s longstanding commitment to Ukraine in the face of ongoing Russian aggression.”

Still, some were concerned that the commercial transaction would be a provocation toward Russia, whose relationship with the U.S. is already strained.

“We have crossed the Rubicon, this is lethal weapons and I predict more will be coming,” a senior congressional official told the Post.

Defense Secretary James Mattis brushed off any notions of provocation in August when he said, “Defensive weapons are not provocative unless you’re an aggressor, and clearly, Ukraine is not an aggressor, since it’s their own territory where the fighting is happening.”

The war in Ukraine’s eastern province between Russian-backed separatists and government troops has killed more than 10,000 since the conflict began in early 2014. Despite efforts by Russia, France and Germany in 2015 to alleviate tensions, fighting still remains on the eve of 2018.

International observers have raised concerns that fighting has intensified in recent weeks. According to the Organization for Security and Cooperation in Europe, a monitoring agency for Ukraine, the number of cease-fire violations increased by 35 percent in the past week compared to a week earlier.