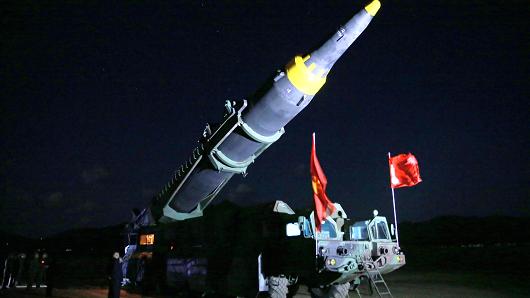 The Treasury unveiled new sanctions on Thursday in response to North Korea’s weapons program and its disregard for UN Security Council resolutions.

Treasury Secretary Steven Mnuchin said in a statement that the department is “committed to protecting the U.S. financial system from North Korean abuse and maximizing pressure on the Government of North Korea until it abandons its nuclear and ballistic missile programs.”

At a recent summit in Washington, D.C., Secretary of State Rex Tillerson said that China has a “diplomatic responsibility to exert much greater economic and diplomatic pressure on the regime if they want to prevent further escalation in the region.”

On Thursday, the Office of Foreign Assets Control designated two Chinese citizens and Dalian Global Unity Shipping. The Treasury said the two individuals have been linked to front or cover companies on behalf of North Korean institutions.

The unit alleged that the Chinese bank had served as a means for North Korea to bypass sanctions and access foreign financial systems. The Treasury alleged that some of those transactions were related to North Korea’s missile programs.

This is breaking news. Please check back for updates.