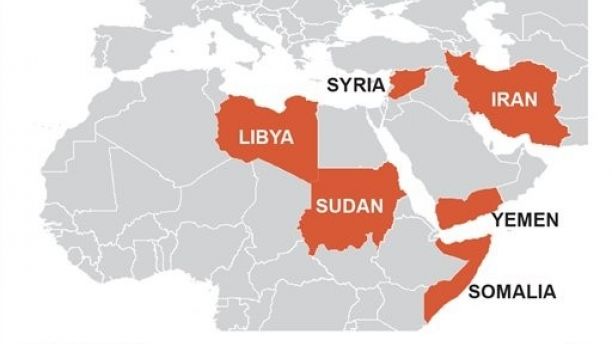 With President Donald Trump’s travel ban set to go into effect Thursday evening, there’s still some confusion about who exactly is barred from coming to the U.S.

The Supreme Court on Monday partially restored Trump’s executive order — widely seen as a Muslim ban — and the administration set new criteria on Wednesday for visa applicants and refugees.

The new restrictions, which were sent to U.S. consulates and embassies Wednesday night, will go into effect at 8 p.m. ET Thursday.

Here’s a look at just who the travel ban affects.

What countries are impacted?

New guidelines stipulate that visa applicants from those six nations must be able to prove a “bona fide relationship” in the U.S. If an applicant cannot prove that relationship, then they will be barred from the U.S. for 90 days.

However, there are exceptions. People who already secured visas will still be allowed. Those entering the U.S. for business purposes, students and journalists might also be allowed so long as that they have the proper documentation, a State Department official told Fox News.

Consular officers may grant other exemptions to applicants from the six nations if they have “previously established significant contacts with the United States;” ”significant business or professional obligations” in the U.S.; if they are an infant, adopted child or in need of urgent medical care; if they are traveling for business with a recognized international organization or the U.S. government or if they are a legal resident of Canada who applies for a visa in Canada, according to the cable sent to embassies.

Who are these ‘bona fide’ relationships?

During the time between the Supreme Court’s ruling and when the travel ban will actually take effect, the State and Justice Departments established definitions for who exactly could fall under the bona fide relationship category.

Things such as a hotel reservation also do not count as a bona fide relationship.

A legitimate relationship should be “formal, documented and formed in the ordinary course rather than for the purpose of evading” the executive order.

The same requirements of visa applicants apply to refugees who will be barred for at least 120 days.

However, the State Department said it will continue with its resettlement of refugees who had already been accepted through July 6, an official told Fox News.

Trump also set a 50,000-person cap on the number of refugees accepted into the country through the end of September. That cap could be reached as early as this week, according to a State Department official.

How is the government’s diversity program affected?

Under the new rules, would-be immigrants from the six affected countries who won a coveted visa in the government’s diversity lottery — a program that randomly awards 50,000 green cards annually to people from countries with low rates of immigration to the United States — will also have to prove they have a “bona fide relationship” with in the U.S. or are eligible for another waiver or face being banned for at least 90 days. That hurdle may be a difficult one for those immigrants to overcome, as many visa lottery winners don’t have relatives in the U.S. or jobs in advance of arriving in the country.

Generally, winners in the diversity lottery only need prove they were born in an eligible country and have completed high school or have at least two years of work experience in an occupation that requires at least two other years of training or experience.