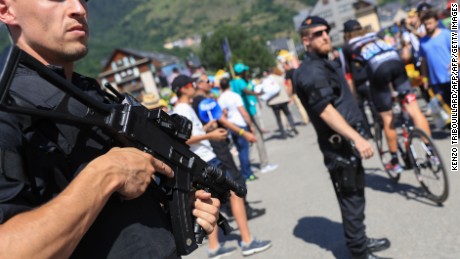 France remains in a state of emergency and on high alert to a possible terror attack and two teams of French special forces — Groupe d’Intervention de la Gendarmerie Nationale (GIGN) — will oversee the race for the second successive year, one in a helicopter overhead and another on the road alongside the Tour.

“Do you think young people in a café on November 13 were aware they were taking risks?” Prudhomme asks CNN Sport from his Paris office overlooking the River Seine.

Prudhomme feels a personal responsibility that everyone — riders, fans, even stray dogs — makes it home safe from this year’s three-week race as it gets under way in Dusseldorf in Germany on Saturday.

Bastille Day (July 14) on this year’s race — the 13th stage from Saint-Girons to Foix — will mark a year since a lorry ploughed into crowds in Nice killing 86 people and injuring hundreds more.

The Tour follows measures imposed by the Ministry of the Interior and there is a control center on every stage, while 23,000 police will attempt to ensure the safety of the race.

“We’re in a constant dialogue and it’s been the case for my 10 years as race director,” says Prudhomme, speaking via a translator.

“For me, the first risk on the Tour concerns what happens on the road in terms of security whether that be children running off or a dog coming off its leash,” Prudhomme explains.

“The second is the international situation as has been the case in Britain, France, Belgium and Germany.

“We have the GIGN with some measures I’m aware of and others I’m not and this year every morning there will be 14 police dogs to sniff out explosives.

“We have to bond together with Germany, Belgium, Britain on this and do even more to organise events like this.”

The search for a French winner

Prudhomme’s office breathes the race from the official route map of the 2017 edition on his wall to the litany of cycling books in the bookshelf behind his desk, some dating back to when he was just seven years old.

“My first memory of the Tour is seeing a face with glasses, and lots of people, and that was Jan Janssen about to win the Tour,” he recalls, referring to the Dutch cyclist who won the race in 1968.

“I then returned to the Tour with friends close to Geneva. I wanted to see Raymond Poulidor [his early idol] but I didn’t. Instead I saw Eddy Merckx with the yellow jersey on his shoulders,” adds Prudhomme as he remembers some of the Tour greats.

“The Tour made me want to become a journalist, and I never imagined becoming the director of the Tour.”

Read: Around the world in 80 days… on a bike

Prudhomme has climbed his way up the ranks from fan to commentator on radio and television to deputy director before taking charge of the race in 2007.

Can he still enjoy it? “It’s less stressful as a journalist,” he says, his head tilting back as he laughs.

“As a fan I knew everything about the Tour but now I’m more worried about a kid losing his Dad’s hand as he’s at the side of the road.”

France has been crying out for a home Tour winner since 1985, and the discussion is common place once more of whether a Frenchman could ride to victory along the Champs-Elysees come July 23.

Resigned, Prudhomme shrugs his shoulders: “When it comes to the month of June and July in France, it’s the same. All eyes turn to Yannick Noah, the last French winner of the French Open, in 1983, and then Bernard Hinault as the last Tour winner in 1985.

“Can a Frenchman win the Tour? Three years ago, I would have said no but since then there’s been three French riders on the podium but the two steps to go higher are pretty steep and difficult to access.

“There’s so much more competition with more nations and the event is so massive that even if the French riders are not good it still remains a fantastic moment.”

The 56-year-old is adamant he does not want the race to get bigger on the road, the logistics of it at its limit.

But he has made no secret of his desire to push to foreign territories. His first Tour in charge began in London, this year’s race starting in Germany. Are there any limits to where the Tour can go?

We’ll go where there’s passion,” he says, gesticulating as if to highlight that passion. “If Belgium was 20,000 kilometers away we’d have to consider it because of that passion.

“The day it takes two hours to Melbourne or Adelaide, then why not. The most important thing is the link to cycling, to where there is passion.”

During Prudhomme’s time, the Tour and cycling has a whole as increasingly cleaned up its act but the specter of drugs still looms large.

Earlier this week, one of Alberto Contador’s teammates, Andre Cardoso, was suspended after testing positive for the blood-booster erythropoietin (EPO), and has since been suspended from the race.

And Prudhomme is stoic enough to admit: “The battle against cheating still exists and will carry on existing. It’s a case in cycling, in other sports but other domains also.

“We still have to fight, and will carry on fighting. Cycling in the past cheated maybe more than other sports but things have considerably changed and now cycling is no longer the bad little duck of sports.

“Now more than ever talent is rewarded. We will see talent rewarded on the road.”