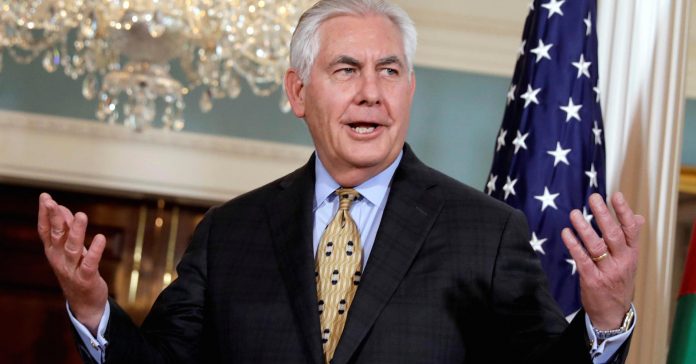 Outgoing Secretary of State Rex Tillerson will give up his duties at the end of Tuesday and officially leave the job at the end of the month.

PresidentDonald Trumpfired Tillerson earlier in the day in a tweet, and Tillerson told reporters he spoke to the president Tuesday afternoon. Speaking at the State Department, the top American diplomat said he will focus on an orderly transition for Trump’s new choice to lead the State Department, CIA Director Mike Pompeo. Tillerson will hand his responsibilities over to Deputy Secretary of State John Sullivan.

Without thanking Trump or mentioning him by name, the outgoing Cabinet secretary expressed appreciation for “selfless leaders” at the State Department and other agencies, his voice breaking at times. He highlighted what he deemed the strides made during his time at the agency, and encouraged his deputies to stay in their current jobs.

“What is most important is to ensure an orderly and smooth transition during a time that the country continues to face significant policy and national security challenges,” he said.

The former Exxon Mobil CEO’s departure caps more than a year of policy clashes, sometimes public, with his boss. The State Department has lost clout in the Trump administration, and the White House has proposed massive budget cuts for the agency. Morale in the department reportedly dropped under Tillerson’s watch.

White House officials told news outlets that Tillerson found out he was fired on Friday. State Department spokesman Steve Goldstein issued a statement saying Tillerson had no plans to leave. He “did not speak to the president this morning and is unaware of the reason” for his firing, Goldstein said.

Goldstein himself got fired Tuesday, as well.

The secretary of State and president publicly disagreed several times during Tillerson’s tenure. Those areas include the Iran nuclear deal, the Paris climate agreement, negotiations with North Korea and the response to Russia’s actions around the globe.

Most recently, Tillerson diverged from the White House this week in saying poison used on a former spy in the United Kingdom “came from Russia.” He took another shot at Moscow in his parting remarks Tuesday.

“Much work remains to respond to the troubling behavior and actions on the part of the Russian government,” he said. “Russia must assess carefully as to how its actions are in the best interests of the Russian people and of the world more broadly. Continuing on their current trajectory is likely to lead to greater isolation on their part, a situation which is not in anyone’s interest.”

In thanking State Department officials for their work, Tillerson highlighted what he deemed progress made in the past year. He said the U.S. “exceeded the expectations of almost everyone” in applying sanctions in an effort to stop North Korea’s nuclear and missile programs.

He added that “much remains to be done” in U.S. foreign policy, pointing to efforts to end a civil war in Syria and ensure stability in Iraq. He said the U.S. would face a challenge in improving its relationship with China, “free of conflict.”

In closing his remarks, Tillerson again thanked the State Department and Americans as a whole for “acts of kindness” and “quiet hard work.”

Said Tillerson: “I’ll now return to private life as a private citizen, as a proud American, proud of the opportunity I’ve had to serve my country. God bless all of you, God bless the American people, God bless America.”