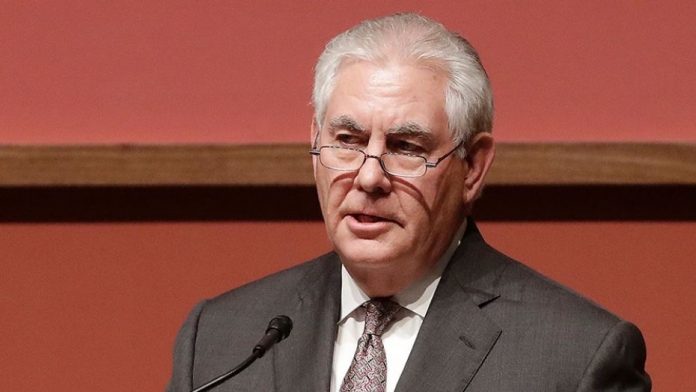 Speaking at an event at Stanford University in California, Tillerson said that South Korean President Moon Jae-in attributed North Korea’s willingness to talk to the pressure felt by the sanctions.

“We are getting a lot of evidence that these sanctions are really starting to hurt,” Tillerson said.

He cited a report by Japan that more than 100 North Korean fishing boats drifted into its waters and, because of the sanctions, nearly two-thirds of those aboard died, Reuters reported.

Although the Trump administration has made it clear that all options, including military, are available, it prefers a diplomatic solution.

Tillerson also praised Beijing for their unprecedented cooperation with increasing pressure on Pyongyang, but pointed out that the same could not be said for Russia.

“We have never had Chinese support for sanctions like we’re getting now,” he said. “Russia’s a slightly different issue, but the Chinese have leaned in hard on the North Koreans.”

Despite the praise, China expressed its frustration after it was not invited to a gathering of 20 nations in Vancouver on how to deal with North Korea’s nuclear threat.

Spokesman Lu Kang on Wednesday said excluding it and others involved in the matter would not be helpful to finding a resolution.

Russia also was left off the list of countries in attendance.

The Russian Foreign Ministry said Wednesday in a statement that “it is an absolutely unacceptable situation, when 17 countries take upon themselves the role of ‘helper’ to the UN Security Council and interpreter of its resolutions, thereby actually putting its authority into doubt.”