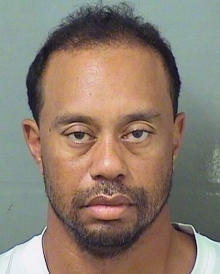 Golfer has been sidelined after back surgery

Golf star Tiger Woods has been arrested and charged with driving under the influence in Jupiter, Fla.

The Palm Beach County Sheriff’s Office says on its website that Woods was booked into a county jail around 7 a.m. Monday.

Jail records show Woods had been arrested by police in Jupiter. He was released just before 11 a.m. on his own recognizance.

He has been charged under a driving under the influence statute.

No other details were immediately available. Messages left for a Jupiter police spokeswoman were not immediately returned.

The former top golfer in the world has been out of action since undergoing the latest in a series of back surgeries in April.

It’s uncertain when he’ll return to the PGA Tour.

With files from CBC Sports