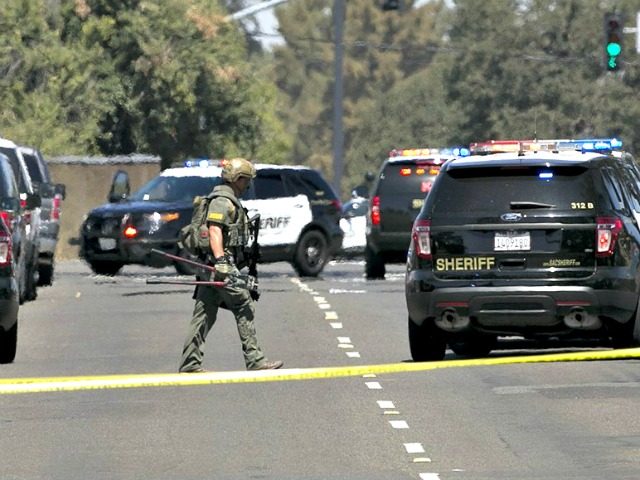 One officer with the Sacramento County Sheriff’s Office (SCSO) and two with the California Highway Patrol (CHP) were shot “near a motel off Capital City Freeway.”

The officers were reportedly involved in a stolen vehicle investigation when the shooting occurred.

KCRA reports that an SCSO “Auto Theft Task Force was working a stolen vehicle operation about 8 a.m. in the area of Fulton Auburn and Auburn Boulevard when they saw two women get into a stolen vehicle.” Officers followed the vehicle and detained the two female suspects without incident.

Afterward, officers went to the “Ramada Inn in the 2600 block of Auburn Boulevard” to execute a search warrant tied to the stolen vehicle. When they knocked on a door to gain entry into a room, the room’s occupant allegedly opened fire, “shooting two CHP officers through the door.” The suspect then allegedly went out on the balcony and shot down on a SCSO deputy, wounding that officer as well.

The weapon was described as a “high-powered rifle.”

The suspect was able to flee the scene in a Dodge Challenger and police gave chase. The suspect crashed and opened fire on pursuing officers, who returned fire, wounding the suspect.

Capital Public Radio reports that “it is unknown if there are more suspects inside the [Ramada Inn]” and “it is also unknown if more weapons are inside the hotel.”