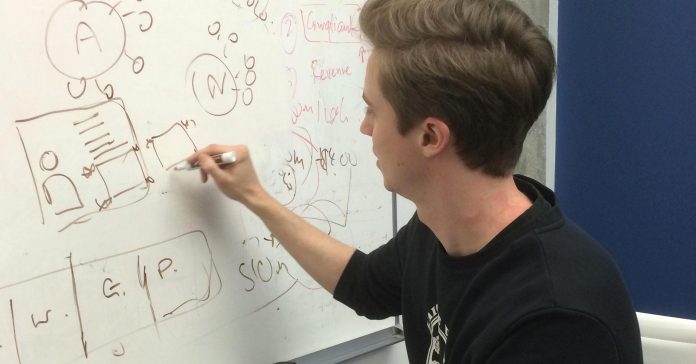 Pete Johnston’s plan to build “the world’s most bad-ass recruitment engine” could put a dent in Microsoft’s plans to wring money from LinkedIn’s 500 million users.

Johnston, a former designer for Google and ad giant M&C Saatchi in London, and his backers, including PayPal co-founders Max Levchin and Peter Thiel, are betting that managing contract workers will one day become as valuable to corporations as hiring and paying their own staff.

The startup, formerly known as Lystable and now renamed Kalo, charges 3 percent of what its customers pay to contractors they hire through the platform. It’s a bet on the growth of the freelance economy.

A report out this month from consulting firm McKinsey suggested that the gig economy will be here sooner than later. The study said 20 percent to 30 percent of workers in the U.S. and Europe already do “independent work.”

For his part, Johnson said that “we know who they are, what they worked on and have access to their financial data.”

But before he and his 50-person startup take on the world’s largest software maker, Johnston first has to get used to a new name for the company, which until last week was called Lystable.

That name had an air of exclusivity — as in, you needed special qualifications to be “listable”—and Johnston wanted to move away from that. So the company asked the 50,000 freelancers registered on its website to come up with ideas. Johnston also hired a consulting firm that came up with another 30 names.

Yet the company’s new moniker came not from either of those sources, but from a much more serendipitous process.

Johnston earlier this month looked out onto San Francisco Bay, and saw two ships passing each other. As they crossed, the name of one was truncated to Kalo — and the proverbial light bulb went on.

“It was an emotional decision,” says Johnston.