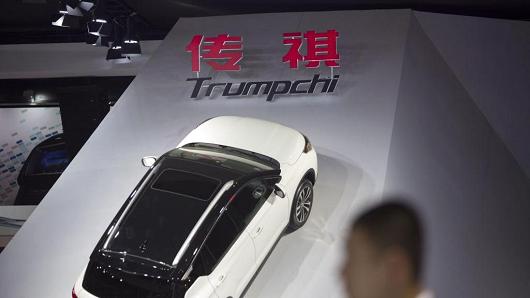 “We called it Trumpchi in 2010,” GAC Motor President Yu Jun told CNBC in his first international TV interview. “We never imagined that seven years later the name would sound so similar to the name of President [Donald] Trump.”

In China, Trumpchi (pronounced “Trump-chee”) is an English take off the word “Chuanqi” which the president of Trumpchi prefers to translate as “delivering goodness.”

In case you’re getting suspicious that the name is a Donald J. Trump brand rip-off, it’s not uncommon for Chinese companies to fashion an English name out of Chinese one. For example in the car industry, Chery Auto is derived from “Qirui” in Chinese. Geely is “Jili.”

GAC’s Yu said he plans to deliver a whole host of Trumpchi goodness to the U.S. when it enters the market in 2019. Trumpchi was the fastest-growing Chinese car brand in China last year and ranked highest among Chinese auto brands in research firm JD Power’s 2016 quality survey.

Trumpchi’s progress in China has given it the confidence to believe it can beat the odds and do what no other Chinese car brand has been able to achieve for more than a decade: conquer the U.S.

“GAC Motor has dreamed of becoming a world class brand. We have made great achievements domestically within a short period of time,” Yu told me at a showroom in the company headquarters. “American drivers are like Chinese drivers. They both like big sizes, big spaces and luxury interior.”

For years, the Chinese have been attempting to build a globally competitive auto industry — and they’ve struggled.

Chinese car brands have sold in emerging markets, yet exports have recently softened. The U.S. has been an elusive market for them — it’s fiercely competitive and Americans have established brand loyalty.

On top of that, fairly or unfairly, the “made-in-China” label has an image problem. So Trumpchi’s efforts will be a gauge to see if Chinese automakers can upgrade themselves and compete on the international stage.