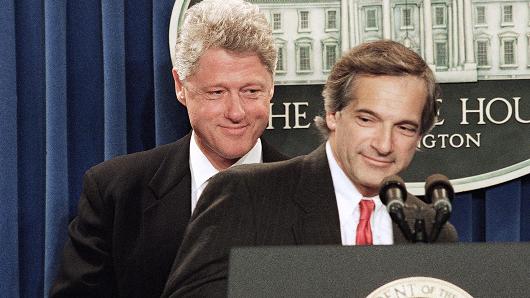 President Bill Clinton yields the podium to Assistant Secretary of State Robert Gallucci in the White House briefing room, Oct. 18, 1994. Gallucci met with reporters after the president announced that North Korea has agreed to freeze its existing nuclear program and accept international inspection of all its nuclear facilities.

“They cheated and we caught them,” Gallucci said, reflecting on the aforementioned events. “From their perspective, they weren’t cheating, they were hedging, and we failed to normalize relations with them, which was a key to that deal in 1994.”

In 2006, the rogue regime detonated its first nuclear weapon. Since then, Pyongyang has carried out a total of six nuclear weapons tests. In September 2017, Kim’s regime claimed it tested a hydrogen bomb, its most powerful weapon to date.

North Korea remains the only nation to have tested nuclear weapons this century.

Even though the 1994 deal disintegrated, the U.S. was able to lull the North’s plutonium program and avert a potential military confrontation on the peninsula.

“One lesson from this is that you can do a deal with the North Koreans, and you can get substantial value out of a deal, which we did for about a decade,” Gallucci said. “But you can also expect, from our perspective at least, that they will cheat on the deal.”