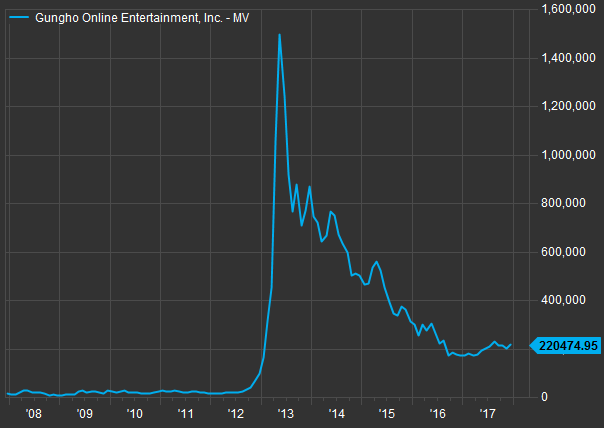 Hardware companies aren’t alone in tying their fortunes to Apple. Mobile game developers don’t have many places to go for distribution, with Apple and Google having largely cornered the market.

Apart from collaborations like Super Mario and Swift Playgrounds, Apple doesn’t stamp its name on too many games, turning instead to third-party developers to supply the entertainment that fills the App Store.

There’s plenty of money to be made. On Christmas day alone, consumers spent $158 million on mobile games, according to data from Sensor Tower. But gaming is also a hit-driven industry, fueled by fads like FarmVille, Pokemon Go and Flappy Bird.

GungHo Online Entertainment, which gets 54 percent of its revenue from Apple, is a prime example of the risk.

Japanese tech mogul Masayoshi Son partnered with Apple to bring the iPhone to Japan in 2008, after practically banging down Steve Jobs’s door to propose a partnership with SoftBank. But it was Taizo Son, his brother, who founded GungHo (SoftBank owned a significant stake until 2016).

The Son brothers have a history of working together, dating back to launch of Yahoo Japan, and both men went on to become billionaires.

GungHo had been in the gaming business since 2002, but it was the launch 10 years later of “Puzzle & Dragons” on iOS that was the runaway success, becoming one of the world’s best-selling games.

But it didn’t last. GungHo’s sales and profits have slowed in recent years. After saying in 2014 that it wanted to be number one in mobile gaming, SoftBank abandoned that strategy last year.

“It’s (a) bit like running a bar,” one Japanese game maker told Bloomberg in 2015. “You’re always on, hustling to get the customers in and to keep them happy. Otherwise you have no business.”