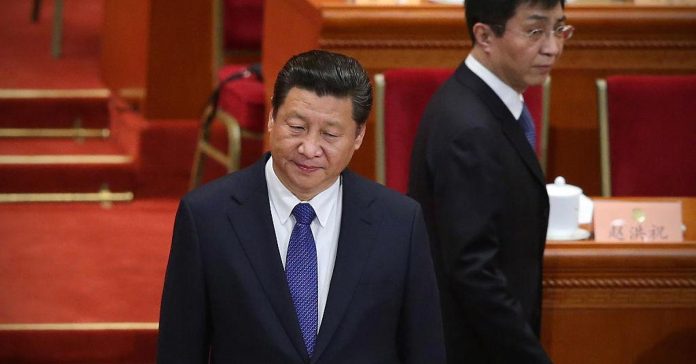 The government’s censorship apparatus had to spring into action after the term limit proposal was unveiled, suppressing keywords on social media ranging from “I disagree” to “shameless” to “Xi Zedong.” Even the letter “N″ was blocked after it was used as part of an equation for the number of terms Xi might serve.

Yet, occasionally, dissent has surfaced through the cracks.

“I love you without any term limits, but if there are, we can just remove them,” read one, while another banner declared that “A country can’t survive without a constitution, we can’t go on without you.”

Chinese studying overseas have been more blunt. Posts in recent days popped up at the University of California, San Diego, with Xi’s picture and the text “Never My President” and spread to more than eight overseas universities, said Lebao Wu, a student at Australian National University in Canberra.

To be sure, Xi’s confident, populist leadership style and tough attitude toward official corruption has won him a significant degree of popular support.

Sipping on a Starbucks drink in Beijing’s business district on Friday, a 56-year-old surnamed Zhang who works in insurance said citizens desired freedom, but wanted a powerful leader who could deliver stability and wealth even more.

Letting Xi rule indefinitely “will strengthen the party’s leadership and offer the quickest path toward development,” Zhang said. “We need a powerful leader. People need an emperor in their hearts. The Western idea that you are not alive unless you are free has not taken root in people’s hearts.”

However, a 35-year old IT industry worker surnamed Huang said her friends were concerned about China returning to the Mao era.

“I saw on (state broadcaster) CCTV’s evening news that they were saying everyone fully supports the constitutional amendments, but no one asked us for our opinion. Our opinion is quickly censored,” she said. “This is China. What can we do about it?”

Neither would give their full names as is common among Chinese when commenting on politics.

Even some of the government’s most outspoken critics have been reluctant to loudly criticize the constitutional amendment.

He Weifang, a well-known blogger and law professor at Peking University, limited his remarks this week to the observance that the constitutional amendment proposal contained 21 articles, and if a delegate supported some articles but opposed others, he or she was entitled to vote against it.

He, who lost his job once for supporting the late dissident writer and Nobel Peace Prize laureate Liu Xiaobo, declined to discuss the term limit amendment, saying the subject was “a bit sensitive.”

Others haven’t held back, driven by an urgent sense that their country is at a crucial point in its history.

Li Datong, a former editor of the China Youth Daily state newspaper and one of the few voices of open opposition, said delegates know the amendment is wrong but no one has the courage to speak out. He compared Chinese citizens to Germans who allowed Adolf Hitler to seize power in the 1930s.

“I know that just a few ordinary Chinese citizens coming out and expressing their opinion will not change anything, but I’m doing this so I can face future generations,” Li said.

“When they look back at this time, I don’t want them to say, ‘Not a single person in China stood up and opposed this.’ When people talk about Nazi Germany, they always ask why the people living during that time didn’t do anything about it,” Li said. “I want to be able to face my past.”

In the run-up to the vote, congress delegates have lavished extra praise on Xi. The party boss of a northwestern province that contains a significant Tibetan population compared him to a living Buddhist deity.

“If you do good things for the people, bring good lives to the people, you should be able to keep serving forever,” said Zhou Shuying, an artist and delegate representing a rural county about 130 kilometers (80 miles) west of Beijing.