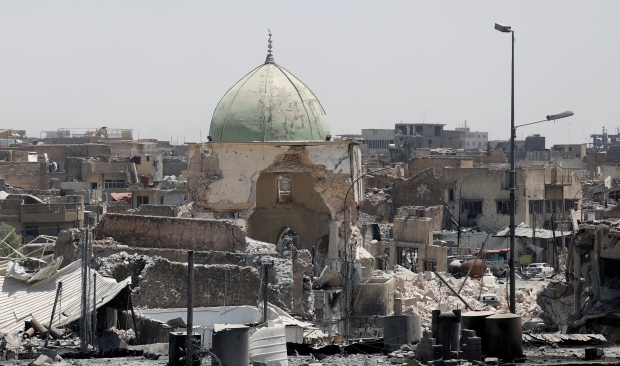 After eight months of grinding urban warfare, Iraqi government troops on Thursday captured the ruined mosque in Mosul from where ISIS proclaimed its self-styled caliphate three years ago, the Iraqi military said.

Iraqi authorities expect the long battle for Mosul to end in the coming days as the remaining Islamic State in Iraq and Syria fighters are now bottled up in just a handful of neighbourhoods of the Old City.

The seizure of the 850-year-old Grand al-Nuri Mosque is a huge symbolic victory for the Iraqi forces fighting to recapture Mosul, which had served as ISIS’s de facto capital in Iraq.

The insurgents blew up the medieval mosque and its famed leaning minaret a week ago as U.S.-backed Iraqi forces started a push in its direction. Their black flag had been flying from al-Hadba (The Hunchback) minaret since June 2014.

Prime Minister Haider al-Abadi “issued instructions to bring the battle to its conclusion,” his office said.

The fall of Mosul would in effect mark the end of the Iraqi half of the ISIS caliphate even though the group would still control territory west and south of the city. Its capital in Syria, Raqqa, is also besieged by a U.S.-backed Kurdish-led coalition.

The cost of the battle has been enormous, however. In addition to military casualties, thousands of civilians are estimated to have been killed.

About 900,000 people, nearly half the pre-war population of the northern city, have fled the battle, mostly taking refuge in camps or with relatives and friends, according to aid groups.

Those trapped in the city suffered hunger and deprivation as well as death or injury, and many buildings have been ruined.

Civilians living nearby were evacuated in the past days through corridors, he added.

CTS units are now in control of the mosque area and the al-Hadba and Sirjkhana neighborhoods and they are still advancing, a military statement said.

A U.S.-led international coalition is providing air and ground support to the Iraqi forces fighting through the Old City’s maze of narrow alleyways.

But the advance remains an arduous task as the insurgents are dug in the middle of civilians, using mortar fire, snipers, booby traps and suicide bombers to defend their last redoubt.

The military estimated up to 350 militants were still in the Old City last week but many have been killed since.

They are besieged in a one-square-kilometre area making up less than 40 per cent of the Old City and less than one per cent of the total area of Mosul, the largest urban centre over which they held sway in both Iraq and Syria.

Those residents who have escaped the Old City say many of the civilians trapped behind ISIS lines — put last week at 50,000 by the Iraqi military — are in a desperate situation with little food, water or medicines.

Baghdadi proclaimed himself “caliph,” or ruler of all Muslims, from the Grand al-Nuri Mosque’s pulpit on July 4, 2014, after the insurgents overran vast swathes of Iraq and Syria.

His speech from the mosque was the first time he revealed himself to the world and the footage broadcast then is to this day the only video recording of him as “caliph.”

He has left the fighting in Mosul to local commanders and is believed to be hiding in the border area between Iraq and Syria, according to U.S. and Iraqi military sources.

Islamic State last week broadcast a video showing much of the mosque and brickwork minaret reduced to rubble. Only the stump of the Hunchback remained, and a dome of the mosque supported by a few pillars which resisted the blast. 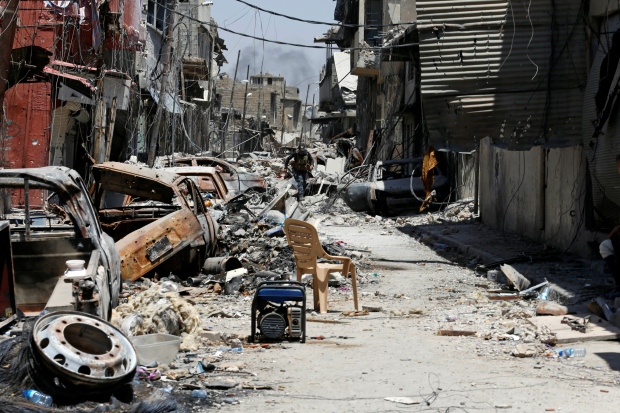 After months of fighting, the ISIS hold in Mosul has shrunk to less than two square kilometres. (REUTERS)

The mosque was named after Nuruddin al-Zanki, a noble who fought the early Crusaders from a fiefdom that covered territory in modern-day Turkey, Syria and Iraq. It was built in 1172-73, shortly before his death, and housed an Islamic school.

The Old City’s stone buildings date mostly from the medieval period. They include market stalls, a few mosques and churches, and small houses built and rebuilt on top of each other over the ages.