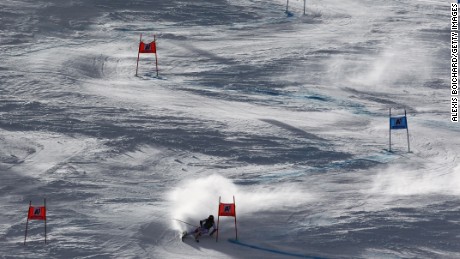 Share on Facebook
Tweet on Twitter
Soelden, which offers some of the highest skiing in Europe and was used as a location for the James Bond movie “Spectre,” lies at the southern end of the Otztal valley, famous for the discovery of “Otzi,” the 3300 B.C. mummy found frozen in ice in 1991.
Early-season skiing, including the men’s and women’s World Cup-opening giant slalom events, takes place on the Rettenbach and Tiefenbach glaciers above the traditional village on October 28 and 29.

Here’s what you need to know about Soelden:

Soelden, which lies about 80 kilometers from Innsbruck, is home to 144 kilometers of slopes stretching from 1,350 meters up to the twin glaciers at a high point of 3,250 meters.

Tiefenbach glacier features broad, gently rolling slopes, while Rettenbach, which has been home to the World Cup circuit since the 2000-2001 season, has more challenging terrain. The glaciers are connected by both lifts and the Rosi Mittermeier road tunnel — the highest road tunnel in Europe which is named after the famous German skier.

Soelden’s 420 hectares of groomed runs cater mainly for beginners and intermediates with 20% designated advanced terrain, although there are myriad off-piste options on the Gaislachkogl mountain.

The reward is spectacular 360-degree vistas from the Dolomites in the south to the nearby Wildspitze — at 3,770 meters the second highest mountain in Austria — and the Zugspitze, Germany’s highest mountain, in the north.

From here, the longest run in the region is a leg-jellying 15 kilometer, 2,000-meter descent back down to Gaislachkogl.

The resort features 31 lifts in all, including the state-of-the-art Giggijoch 10-person gondola which is capable of transporting 4500 persons per hour from the base area up to 2,284 meters.

The well-known Obergurgl resort, which sits at the end of the valley, offers joint lift tickets with Soelden.

Adventurous skiers and boarders can tackle the Big 3 circuit, a 50-kilometer trail taking in three peaks higher than 3,000 meters — the only resort in Austria where this is possible.

The new James Bond museum at the Gaislachkogl summit tells the immersive story of the making of the 007 films in a cutting-edge installation. The rooftop terrace is connected to Gaislachkogl peak by a suspension bridge which accesses a platform 20 meters above the glacier snout.

Above the Tiefenbach glacier, a 15-meter pyramid stands sentinel over a steel and glass footbridge which extends 20 meters over a gaping abyss with the glacier far below. It offers up-close views of the Wildspitze.

There are about 30 huts and mountain restaurants dotted around the ski area, with some of the highlights including the contemporary glass-fronted Ice Q at the top of Gaislachkogl, the rustic Gampe Thaya, and the sunny Heidealm.
In the town, Restaurant Corso receives good reviews on TripAdvisor, while there are fine-dining options at places such as Hotel Bergland and Ötztaler Stube.

Soelden is a lively apres-ski spot with the party starting on the mountain — possibly at Eugen’s Obstlerhütte on Giggijoch or at Bubi’s Schihütte on Gaislachkogl — before moving onto numerous bars in town, such as Schirm Bar and Fire and Ice.