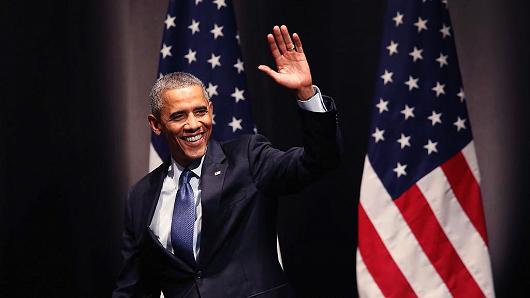 President Barack Obama waves to guests as he arrives for a speech to students and faculty from the Kellogg School of Management at Northwestern University on October 2, 2014 in Evanston, Illinois

Former president Barack Obama is in advanced talks with Netflix to produce a series of shows that would be available only on the streaming service, the New York Times reported on Thursday.

If the deal goes through, Obama and his wife, Michelle, would provide exclusive content to Netflix that will focus on inspirational stories, according to the report, which cited people familiar with the discussions.

Show ideas include Obama moderating conversations on topics such as health care, immigration and climate change, the Times said.

Other episodes could reportedly feature the former first lady discussing, for instance, a topic she championed during her time in the White House, such as nutrition.

The Obamas could also put their brand on or endorse documentaries or fictional programs on Netflix which are in line with their values, the report says.

Obama has no intent to use the shows to respond to his successor, Donald Trump, according to the report.

Read the New York Times for more on the possible Obama-Netflix tie up.