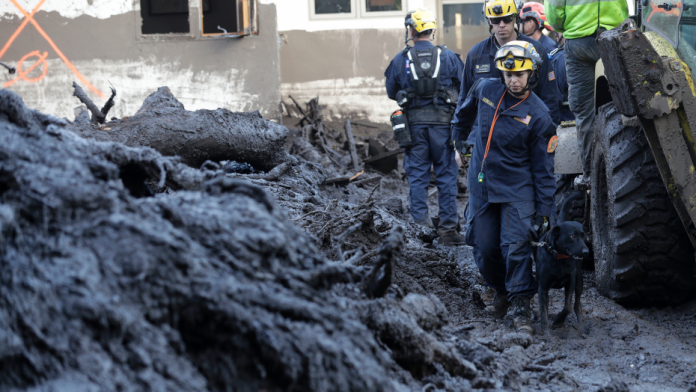 MONTECITO, Calif. –  The Latest on the California mudslide disaster (all times local):

There’s been another significant adjustment in the number of people reported missing in the deadly mudslides along the California coast.

Earlier in the day, the number was 48, then authorities said that was a clerical error and the real figure was eight.

Brown said the latest number includes active missing-persons cases being worked by detectives. But it also encompasses those who have been named in calls to the operations center and family assistance center.

Brown says those people may simply have left the area before or after the mudslides or may just be out of touch with the family and friends looking for them.

At least 17 people were killed and hundreds of homes damaged or destroyed when mudslides tore through Montecito early Tuesday.

Authorities have released the names of 17 people killed by mudslides in California.

The Santa Barbara County coroner’s office says the victims range in age from 3 to 89 and all are residents of Montecito.

The mudslides roared through the coastal city early Tuesday as heavy rain fell on a huge area of hills and mountains burned by a December wildfire.

The search for additional possible victims is continuing.

The company that employs the mother of a 14-year-old girl who was dramatically pulled from a California home that collapsed in a mudslide says the girl’s father and 16-year-old brother are still missing.

NeoTract, a maker of devices used in the medical field of urology, has launched a fundraising page asking for financial support for the family of Kim Cantin.

Cantin’s 14-year-old daughter, Lauren, was rescued by firefighters this week after being trapped for hours. The house was flattened hours earlier by the deadly storm-triggered mudslide that ravaged the Montecito area.

“I thought I was dead for a minute,” the dazed girl, covered in mud, told firefighters before she was taken away in an ambulance.

A well-known local real estate agent has been identified as one of the 17 people killed after flash floods and mudslides tore through a Southern California neighborhood.

Rebecca Riskin, the founder of Riskin Partners, was killed when mudslides ripped through Montecito. Her company confirms her death in a statement posted Wednesday night on Facebook.

The statement says Riskin was an “exceptional woman” who had exuded strength, grace and elegance.

Southern California authorities have corrected the number of people missing since the Montecito mudslides to eight.

The correction follows an early Thursday update that raised the number to 48, but the incident management team then issued retraction saying there had been a clerical error.

The number of confirmed fatalities remains at 17.

The number of people missing after the deadly mudslides in Montecito, California, has surged to 48.

The number of missing persons has fluctuated since the disaster hit early Tuesday morning and had been as low as 16 on Wednesday evening.

Anderson says the number of confirmed fatalities remains at 17.

County emergency manager Jeff Gater tells the Los Angeles Times that the alert issued around 3:50 a.m. Tuesday was sent because of deteriorating conditions and followed one issued by the National Weather Service.

For days beforehand, the county had issued repeated warnings through social media, news media and community information emails about the potential for mudflows from the huge wildfire scar in the hills above neighborhoods.

Gater tells the Times more than 200,000 emails and other warnings were issued, but the county decided not to use the push alert system to cellphones out of concern that it might not be taken seriously.

Hundreds of searchers are still hunting for survivors of the flash flooding and mudslides near Santa Barbara, California.

They slogged through ooze and poked long holes into the mud on Wednesday as they searched for victims a day after the massive debris flow passed through.

The death toll from Tuesday’s pre-dawn flash flood rose to 17 as more bodies were found. Another 17 were still reported missing.

Authorities are hoped to find them alive.

By Wednesday, some 500 searchers had covered about 75 percent of the inundated area in the search for victims.