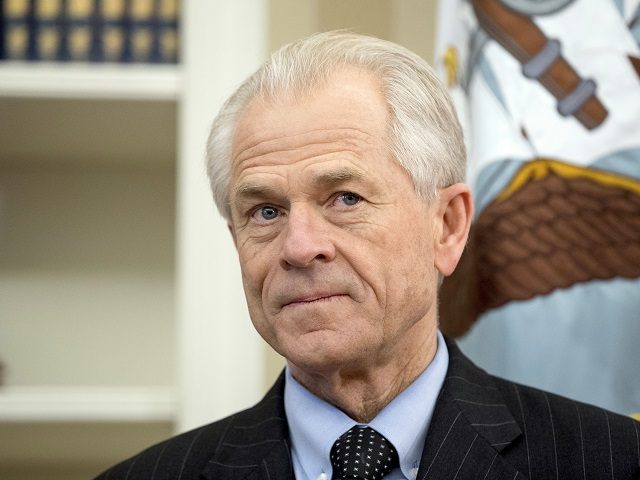 The Hill‘s Niv Elis profiles Peter Navarro, the trade representative for President Donald Trump, who is rising in the post-Gary Cohn White House thanks to his militant economic response to China’s quest for global domination — much to the chagrin of “free trade” establishment Republicans.

One must only watch a few minutes of Peter Navarro’s economic hypernationalist film “Death By China” to understand why President Trump has an affinity for the man.

In the movie’s opening scenes, a flag-painted cutout of the United States tumbles to the ground and is brutally stabbed with a knife.

As the map gushes blood, the knife’s handle is revealed to resemble Chinese currency, and its blade is labeled “Made in China.”

The term “American carnage” comes to mind as the factories explode, leaving smoldering craters in their wake.

Navarro, now the 68-year-old director of the White House National Trade Council, sees eye to eye with Trump on the need for tough, protective tariffs to insulate American jobs and swat down the meddling tentacles of China’s aggressive economic policy.

In his early days [at the White House], his influence waned as ideological foes such as National Economic Council Director Gary Cohn successfully sidelined him.

Now, with Cohn’s impending departure in protest of the new tariffs, Navarro and his views are ascendant at the White House, a prospect that has unnerved many congressional Republicans.

Read the rest of the story here.