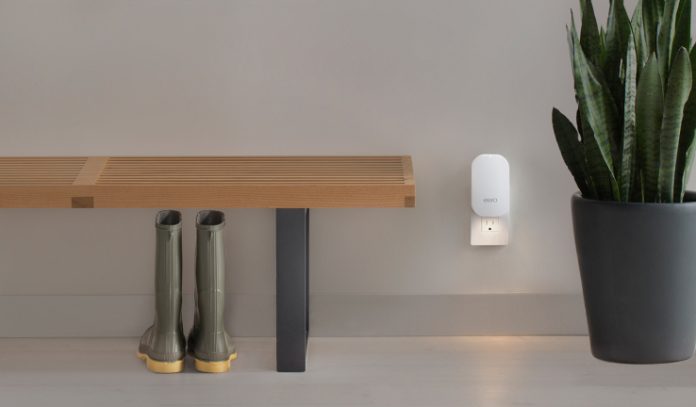 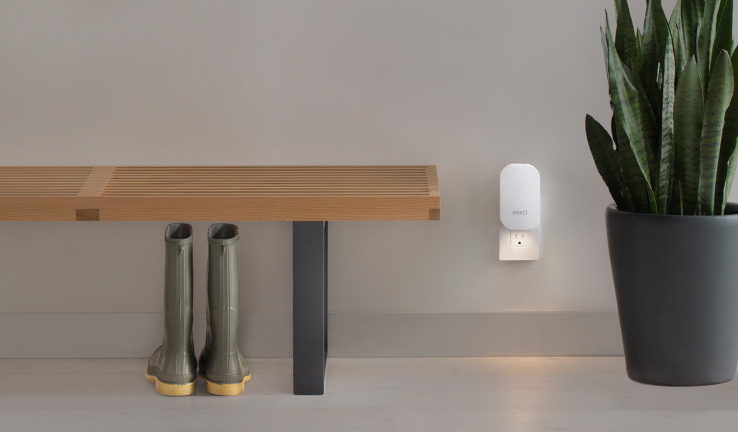 Since launching two years ago, wireless networking startup Eero has sought to make it easier for consumers to blanket their homes in strong WiFi. With the its newest hardware products, Eero took a step forward in that goal, in part by introducing Beacons that can be placed nearly anywhere in a person’s house or apartment.

There’s not much really to say about the ease of setting up a new Eero system. Out of the box it only takes a few minutes to install the Eero app, connect a base router to your cable modem and get a network up and running. The company has taken what used to be a laborious process and made it drop-dead simple.

Once your first unit is up and running, adding another Eero or Beacon is as simple as pushing a button, plugging it into an outlet, and letting the app find and set up that next device. You can just repeat that process for as many units as it takes to coat your entire home in streaming fast WiFi.

Eero claims that its second-generation base units are twice as strong as the initial units they manufactured. Without doing any serious benchmarking, I found that there was only a nominal increase in strength throughout my home.

But the advantage of having Eero in your home comes from setting up a mesh network of devices to extend the reach of your WiFi. And on that front, Eero still excels. In the year-plus since it launched, Eero remains a great solution for anyone looking to set up a home-wide WiFi network.

So the question is, how do you take a product that is nearly perfect and make it even better? For Eero, the answer is to make your WiFi system even more flexible and to provide ways to put its WiFi routers in more places. Hence, the introduction of the Eero Beacon.

A Router In My Bathroom

Eero routers were always designed to look like a natural addition to their surroundings, to not seem out of place sitting on a bookshelf or on a coffee table in the corner of the room. But Eero’s Beacons take that to the next level, by removing the cord and enabling users to plug them into non-obvious places like kitchens and hallways.

I was skeptical about how much I would like the Eero Beacon. That is, until I actually set one up in a place I would have never thought of placing a WiFi router — my bathroom.

I live in an apartment that has a typical railroad layout, with a series of rooms connected by one long hallway that runs the length of the building. To provide WiFi coverage throughout, I placed my cable modem and WiFi router in an office roughly in the center of the apartment.

Before I first installed the first-gen Eero system in my home, we would have inconsistent coverage in the very front bedroom of the apartment and in the very back, which just happens to be my kitchen. After installing a three-Eero system a year ago, I got better coverage in both areas, but still felt the connection between the middle and back of the apartment wasn’t as strong as I would like. 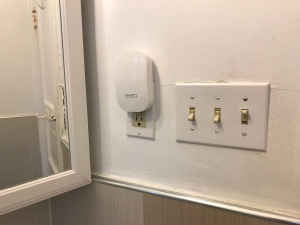 Yes, that’s a WiFi router in my bathroom

The reason for this was pretty easy to diagnose: in between the office and the kitchen were two bathrooms and another bedroom. That means four walls between the middle and back of the apartment in an older building serving to weaken the wireless signal.

With the Eero Beacon, the solution to my problem is obvious. While the bathroom wouldn’t usually be an obvious place to put a wireless router, the combination of size and form factor makes the Beacon seem like an oversized night light.

For that matter, I put the second test unit Beacon in my kitchen, where it fits right in while plugged into an outlet next to the stove. It’s useful in boosting my WiFi in a room that would typically get pretty weak signal in the back of the apartment.

An App That Does Almost Everything

Once you’ve set up an Eero system in your home, you might never have to open the company’s app ever again.  But if you do, you’ll find it has pretty advanced diagnostics for keeping tabs on all the Eero devices in your home and all the devices connected to your network.

The app allows you to see the strength of connection that each device has, as well as which Eero router it is connected to. Users can set up profiles for people using the WiFi and the devices they have connected to the network.

By doing so, app users can pause connection for related devices or family members, or create scheduled pauses in network availability. That would allow parents, for instance, to restrict Internet usage by their children late at night or to easily take away access for misbehavior. (I really can’t think of anything more cruel, TBH.)

Most importantly, the app provides incredible transparency and granular control of the network, while also making administration simple for the common user.

With the addition of a stronger base wireless router and the addition of its Beacons, Eero is an even better option for consumers looking to improve connectivity in their homes. While it might not be the cheapest WiFi networking system available (prices below), the ease of setup and flexibility in network management provide good reasons for anyone looking to upgrade their network to check out its products.

And as a happy Eero user already, I can say that the addition of its Beacon makes a pretty awesome family of products even better.