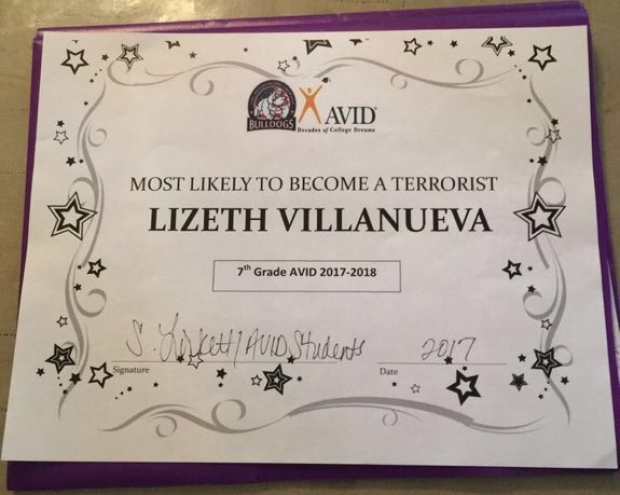 Lizeth Villanueva didn’t think it was very funny when her Grade 7 teacher gave her a “Most Likely To Become A Terrorist” award as a “joke”.

“She said it’s supposed to be a joke, and before she started the award thing, the fake awards, she said that some people might get offended, but she doesn’t really care,” Lizeth told As It Happens host Carol Off.

The 13-year-old girl gets good grades and takes an advanced learning class at Anthony Aguirre Junior High in Channelview, Texas, to help prepare her for college. She’s never had any disciplinary issues.

“I guess that’s how she looks at me,”Lizeth said. “I was upset and I was thinking, ‘Why would she give this to me?'”

Her mom didn’t think it was very funny either — especially since she got it the day after a suicide bomber killed 22 people, some of them children, at an Ariana Grande concern in Manchester, U.K.

“Right after school I told my mom and I told her it was supposed to be a joke, and she was like ‘What is this?'” Lizeth said.

The school’s principal Eric Lathan issued an apology for the “insensitive” awards.

“I want to ensure all students, parents and community members that these award statements and ideals are NOT representative of the Aguirre Vision, Mission and educational goals for its students. An investigation will be launched into these events.”

The school has suspended the teacher for two days, but has not released her name.

“I just don’t think that’s enough,” Lizeth said. “Probably kick her out of that school or something.”