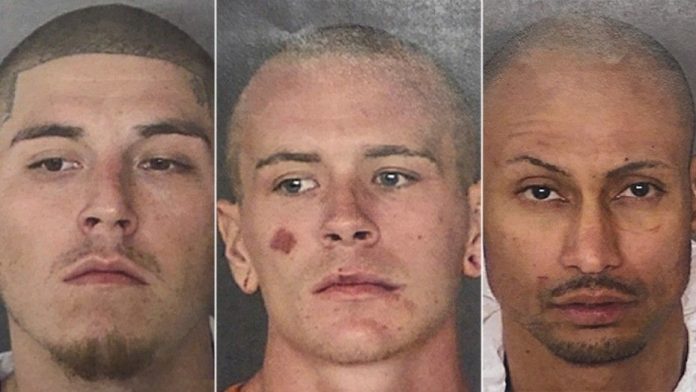 Murder suspects Eric Trevino, Jacob Anthony Brownson, and Luis Antonio Arroyo escaped from the Bexar County jail in San Antonio by apparently crawling through a window Friday. All three have been recaptured. San Antonio police say the three men were caught around midday Friday, less than two hours after they turned up missing from the Bexar County Adult Detention Center. (Bexar County Sheriff’s Office via AP)

Three murder suspects busted out of a jail in Texas — but their getaway came to a sudden end Friday after an ex-girlfriend of one of the men dropped them off at a Sonic drive-in, and promptly called the cops.

Now, a department jailer in San Antonio has been placed on administrative leave, officials said.

“It’s something that shouldn’t be allowed to occur,” Salazar told KSAT.

It’s not clear why the ex-girlfriend, who was their getaway driver, contacted authorities after dropping them off at the restaurant, according to KSAT.

The inmates were caught less than an hour later.

The three climbed a wall Friday morning in a jail recreation area, cut a screen, jumped to a roof and used bed sheets to lower themselves.

Then they went out the front side of the jail where visitors alerted officials.

“Detention officer Bryant Canales was placed on administrative leave while the investigation is active and ongoing,” said a statement from the Bexar County Sheriff’s Office. “We are also looking into the possibility other inmates and several suspects outside the walls who may have assisted.”