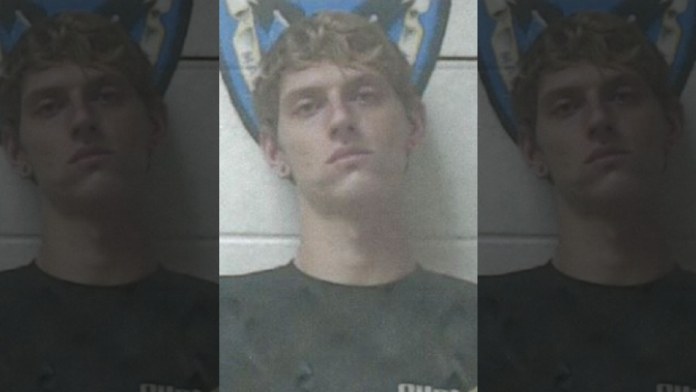 Murder suspect Dylan Cecil Ferguson, 20, is wanted by the Macon County Sheriff’s Office and the Tennessee Bureau of Investigation after he escaped from the county jail Wednesday.

A manhunt is under way in Tennessee after three people — one of them a murder suspect — escaped from a county jail Wednesday.

Dylan Cecil Ferguson, a 20-year-old homicide suspect, escaped from the Macon County Jail on Wednesday, the Tennessee Bureau of Investigation said. TBI warned Ferguson “should be considered armed and dangerous.”

Two other inmates – Jeffrey Strong and Matt White – may be with Ferguson, who is wanted in connection with a man’s 2016 death, according to TBI.

An alert earlier Wednesday about a stolen white Ford F-250 that police believed Ferguson might have been driving in has since been recovered, although Ferguson’s location is still unknown.

Ferguson is a 6-foot-2-inch tall white male, with brown hair and green eyes, according to the TBI. The Bureau is offering a reward of up to $2,500 for information leading to Ferguson’s arrest.

Those with information on Ferguson’s whereabouts should call 1-800-TBI-FIND.

It’s unclear how the inmates escaped the Macon County Jail. The Tennessean reported the destination of the inmates also remains unclear.