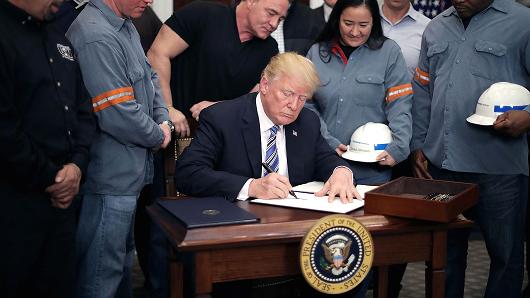 Surrounded by steel and aluminum workers, U.S. President Donald Trump (C) signs a ‘Section 232 Proclamation’ on steel imports during a ceremony in Roosevelt Room the the White House March 8, 2018 in Washington, DC.

February’s robust U.S. jobs numbers were seen as a “Goldilocks” report that was just right for the markets: Not too hot to indicate an overheating economy and not too cold to suggest the Federal Reserve should be concerned.

That was in comparison to when expectation-topping average hourly earnings in the January employment reportlaunched a sell-off that took stock markets into correction territory early last month.

Investors are also keeping an eye on trade developments after U.S. President Donald Trump last week signed proclamations imposing tariffs of 25 percent and 10 percent on steel and aluminum imports, respectively, although exemptions were made for several countries.

Some are concerned the move could result in heightened trade tensions should U.S. trading partners implement retaliatory actions, potentially affecting global growth in the longer term.