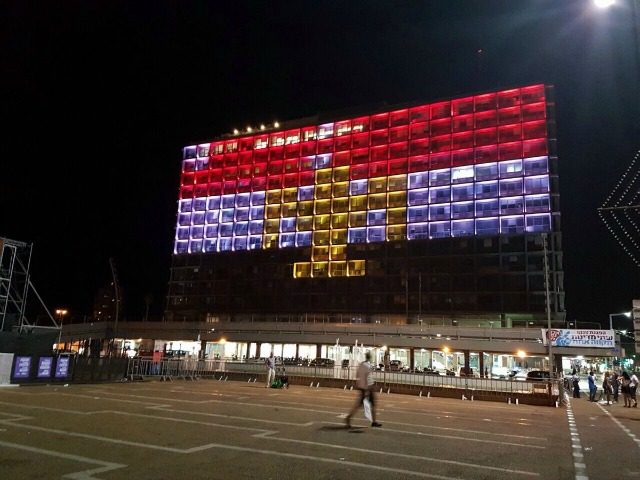 The Times of Israel reports:  The Tel Aviv municipality building was lit in the colors of the Egyptian flag Saturday night, in a gesture of solidarity with Israel’s neighbor a day after a deadly shooting attack near Cairo.

Tonight we light up the @TelAviv Municipality with the flag of #Egypt. Those seeking peace will not rest until such horrific acts will end. pic.twitter.com/ym2yiRZClz

The building had been illuminated in various flags following other international terror attacks — on Tuesday it was lit in the colors of the Union Jack after a deadly suicide bombing in Manchester — but the latest tribute is the first time the gesture has been made toward an Arab country.

Twenty-nine people were killed Friday morning when a bus carrying Christian Copts pilgrims was shot at by masked gunmen in the Egyptian Minya province, south of Cairo. According to the Egyptian cabinet, 13 of the victims remained hospitalized in Cairo on Saturday evening. The Islamic State jihadist group claimed responsibility for the attack, which came on the eve of the Muslim holy month of Ramadan.