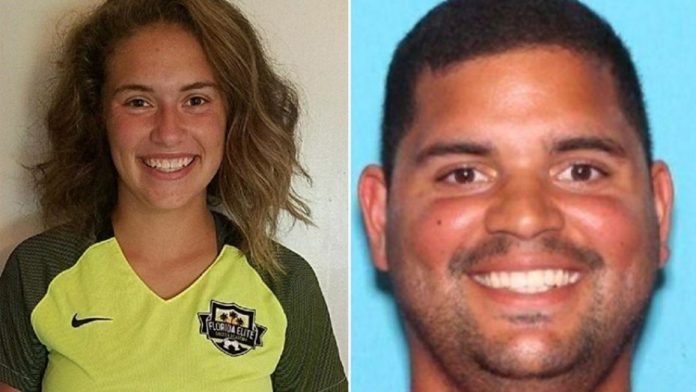 Caitlyn Frisina, left, is believed to be with Rian Rodriguez.

The Florida high school girls soccer player who allegedly ran off with a boys soccer coach is believed to be heading to the Northeast Thursday as more details emerge in a case that’s left her parents, boyfriend and community baffled.

Caitlyn Frisina, 17, who is believed to be with 27-year-old Rian Rodriguez, was last seen at a pawn shop in Fayetteville, N.C., on Sunday, after being spotted at gas stations in Georgia and South Carolina, according to surveillance footage photos released by police.

“We love you and we miss you, and we’re waiting here with open arms” said her mother, Scarlet, during an emotional plea Wednesday at a press conference.

The teen was last seen at her home Saturday night before linking up with Rodriguez – the head coach of the boy’s soccer team at Fort White High School in Columbia County, the school Frisina attends.

Deputies told News 4 Jax Frisina’s bedroom window was left open with the screen pulled off, and footprints leading away from the property indicated she was alone when she decided to leave the home. Frisina’s cell phone was found in the bedroom with her data wiped, and her car was still in the driveway Sunday morning when her parents discovered her missing and contacted police.

“We still believe they are heading to the northeast but are asking everyone to continue watching for them,” the Columbia County Sheriff’s Office posted on Facebook Thursday.

Police said they are working to retrieve the erased data from Frisina’s phone.

But one piece of evidence they have obtained is a text message she sent to a friend indicating there “may be a relationship” between her and Rodriguez, the station quoted police as saying in a report.

Murray Smith, the public information officer for the Columbia County Sheriff’s Office, also told ABC News that through interviews officials have learned of the “blossoming of a potential relationship” between the two. He added Frisina has family in New York and Rodriguez has relatives in Canada and possibly Pennsylvania.

Frisina’s father says there were no indications Caitlyn would suddenly leave with Rodriguez, a family friend.

Ward Frisina told Action News Jax that just days before Caitlyn disappeared, she brought her boyfriend over for Thanksgiving dinner and took a pecan pie to his home.

“Caitlyn has a current boyfriend who also is beside himself because everything was fine,” Smith also told ABC News.

Attempts to contact Rodriguez by police and Frisina’s parents have been unsuccessful.

“We’re going to treat this until we find out that she is okay, as that she may be in harm’s way,” Columbia County Sheriff Mark Hunter said Wednesday.

The Columbia County School District has said in a statement it is working in tandem with the sheriff’s office and Rodriguez has been suspended pending the ongoing investigation.

It added Rodriguez – despite his current whereabouts being unknown – “will be restricted from all contact with students.”

In a Facebook profile that appears to belong to Rodriguez, he says he is “adventurous and down to earth.”