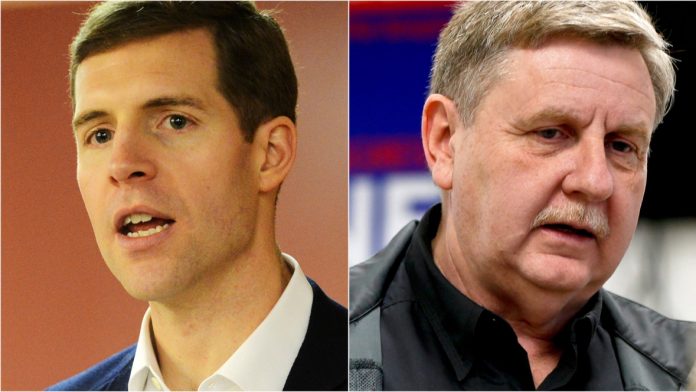 Working-class voters across western Pennsylvania on Tuesday are weighing in on a surprisingly tight congressional contest that has pitted the strength of U.S. President Donald Trump’s grasp on blue-collar America against the energy and anger of the political left.

The fight between Republican state Rep. Rick Saccone and Democrat Conor Lamb has drawn national attention as a bellwether for the midterm election in November.

‘This didn’t have much to do with President Trump.’
— Candidate Conor Lamb

In a region Trump carried by 20 points, the White House has scrambled to rally voters behind Saccone, who cast himself as the president’s “wingman,” but has struggled at times to connect with the blue-collar coalition that fuelled Trump’s victory little more than a year ago.

Lamb, a 33-year old Marine veteran and former federal prosecutor, downplayed his opposition to the Republican president on Tuesday and insisted instead that the race hinged on local issues.

“This didn’t have much to do with President Trump,” Lamb said after casting his vote in suburban Pittsburgh.

The election has far greater political consequences as each party prepares for the November midterm elections.

For the White House and its Republican allies, a Tuesday loss would represent both a profound embarrassment and major cause for concern in the broader push to defend its House and Senate majorities.

The president has campaigned in the district twice and sent several tweets on Saccone’s behalf. Other recent visitors include the vice-president, the president’s eldest son, the president’s daughter and the president’s chief counsellor. Outside groups aligned with Republicans have also poured millions of dollars into the contest.

For Democrats, a win would reverberate nationwide, while even a narrow loss would be viewed as a sign of increased Democratic enthusiasm just as the midterm season begins.

Democrats must flip 24 Republican-held seats this fall to seize control of the House, and few counted on this Pittsburgh-area district to be in play. The seat has been in Republican hands for the last 15 years.

It’s open now only because longtime Republican congressman Tim Murphy, who espoused strong anti-abortion views, resigned last fall amid revelations of an extramarital affair in which he urged his mistress to get an abortion.

After voting Tuesday in Allegheny County, Saccone downplayed the significance of the unusually close race.

“The Democrats … they’re throwing everything they can at this race,” he said. “There hasn’t been an open seat for a long time.”

With polls showing a tight race for months, Saccone has implored the GOP-leaning electorate that their choice is about “making America great again,” just as the president says.

The 60-year-old Air Force veteran turned state lawmaker and college instructor enjoys enthusiastic backing from social conservatives who’ve anchored his state career, and he’s perhaps at his most animated when he touts his opposition to abortion rights.