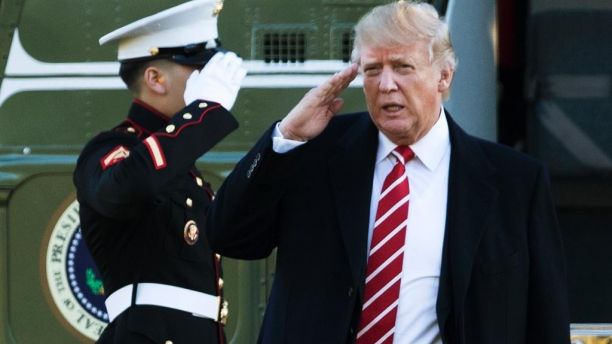 The suggested plans do, however, call for a representation of veterans across U.S. history and an air demonstration, according to a note from Defense Secretary Jim Mattis’s office at the Pentagon.

The letter, dated Thursday and addressed to the Chairman of the Joint Chiefs of Staff, gives guidance for planning “a military-themed Veteran’s Day Parade” in Washington on Nov. 11.

Plans are advancing for a U.S. military parade that President Donald Trump requested.

The planned parade is intended to highlight the contributions veterans have made “throughout the history of the U.S. Military,” the letter said, dating from the Revolutionary War to present day, “with an emphasis on the price of freedom.”

Among the list of “planning considerations” was to merge the event with the annual Veterans Day Parade in Washington, and to have it run from the White House to the Capitol.

The parade should “include wheeled vehicles only, no tanks,” the letter said, as “consideration must be given to minimize damage to local infrastructure.”

And at the conclusion of the parade woukd be “a heavy air component” that, if possible, incorporates older aircraft, according to the outline.

The letter asked for the inclusion of the Medal of Honor Association, as well as Veterans Service Organizations, and to have veterans and Medal of Honor recipients standing around President Trump at the Capitol.

Organizers also reportedly hope to “highlight the evolution of women Veterans from separate formations in World War II to today’s integrated formations.” And formations donning “period uniforms” may be utilized to “represent veterans from previous wars,” the letter said.

Inspiration for a military parade in Washington, D.C., reportedly arose after Trump attended France’s Bastille Day parade as the guest of honor in July. The president admired the country’s celebrations and called the parade “magnificent.”

The Joint Staff will reportedly oversee the planning of the procession, while Northern Command, which oversees U.S. troops in North America, will carry it out.

Fox News’ Nicole Darrah and the Associated Press contributed to this report.