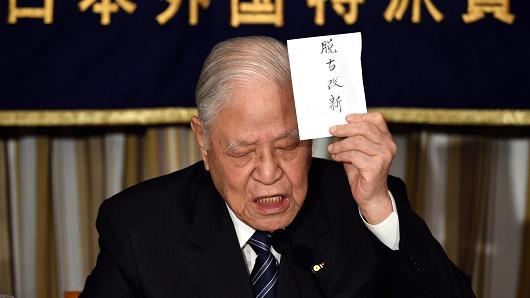 Former Taiwanese president Lee Teng-hui displays a sign reading ‘departure from the old, bracing for the new’ during a luncheon in which he spoke about the ‘establishment of Taiwan’s Autonomy’ at the Foreign Correspondents’ Club in Tokyo, Japan, on July 23, 2015.

A campaign for a referendum on Taiwan’s independence has been launched with backing from two former presidents, local media reported Wednesday.

Lee Teng-hui and Chen Shui-bian, who have both served as heads of state, voiced their support for an initiative to hold a vote on April 6, 2019, according to Focus Taiwan News Channel.

Taiwan’s official name is the Republic of China. The island’s status as an independent nation is complicated by its neighbor China, who regards the island as a renegade province under the One China Policy. As a result, Taiwan is not permitted to be a member of the United Nations or other international organizations.

Lee, as reported by Focus Taiwan, described the proposed vote as the “most powerful weapon” that would enable the Taiwanese people to establish a “normal country.”

The campaign to call a referendum was launched by Kuo Bei-hong, chairman of Formosa Television channel.