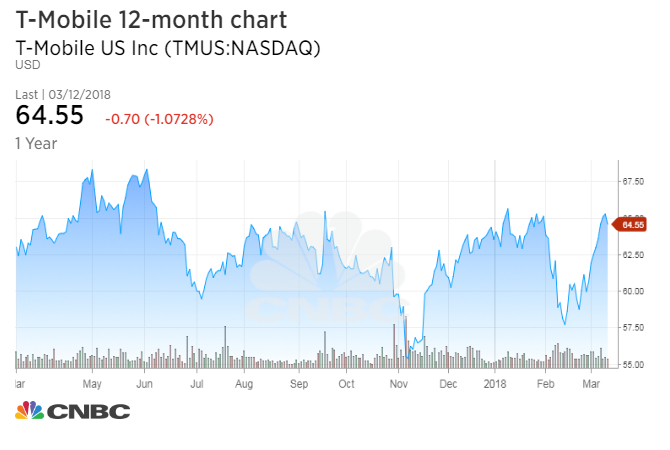 T-Mobile looks “unstoppable” and is poised to sap even more market share from larger competitors as it invests heavily in its network and turns cash flow positive, according to Guggenheim.

“T-Mobile is in a unique position among the carriers. While it does not enjoy the scale economics of AT&T and Verizon, it enjoys the advantage of having the superior position of growth as it takes continuous share from the other carriers,” analyst Mark McCormack wrote Monday in a note titled “The Uncarrier looks Unstoppable.”

“The company also is enjoying the fruits of its growth and has turned cash flow positive,” he added.

Declaring T-Mobile Guggenheim’s best idea in telecommunications, McCormack initiated coverage with a buy rating and set a 12-month price target of $80, implying nearly 24 percent upside over the next year.

Though T-Mobile has underperformed the S&P 500 over the past 12 months, its stock is up more than 11 percent in March, well ahead of the market’s 4.5 percent climb. The company announced a $1.5 billion stock buyback program in December.

McCormack highlighted CEO John Legere’s leadership in turning the carrier around after its merger deal with Sprint fell through last year.

“Suffering from network inferiority, lack of the iPhone, and a languishing brand image, the new team began the journey to recovery,” he said. “Fighting through declining average revenue per user, as the company moved to unsubsidized rate plans, subscriber growth fueled the company’s turnaround and far outpaced the growth of other carriers. In fact, as of now, T-Mobile is the only carrier that grows service revenue.”

T-Mobile’s next strategic move will be to expand geographically by acquiring spectrum, an “easy” way for the company to steal even more share from AT&T and Verizon, according to McCormack. It also plans to grow its retail presence having opened 1,500 new stores in 2017.

To be sure, the analyst is also upbeat on Verizon and AT&T, initiating both with a buy rating amid a “rapid transformation change” in the telecommunications industry. He’s less positive on Sprint, which he argues remains challenged competitively and recommends selling.

Shares of Verizon and AT&T each rose 0.2 percent following the analyst’s call.