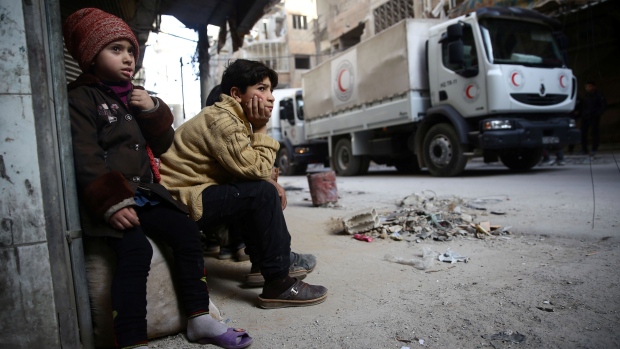 The Syrian army has, in effect, cut off the two large eastern Ghouta towns of Douma and Harasta by advancing into areas between them and the rest of the rebel enclave, and by bringing roads linking them into firing range, a war monitor said.

The advances on Saturday morning included taking the town of Mesraba at a narrow point joining the northern and southern halves of the rebel area, the Britain-based Syrian Observatory for Human Rights said.

Syrian state media are reporting heavy clashes and government troops’ progress on several fronts in the eastern suburbs of the capital Damascus.

The government-controlled Syrian Central Military Media said opposition fighters in Mesraba are crumbling amid the offensive.

A wounded man from Mesraba receives treatment at a makeshift hospital in Douma on Feb. 19 following airstrikes on his village. (Hamza al-Ajweh/AFP/Getty Images)

State-run Ikhbariyah TV said government forces and their allies captured farms outside the village of Aftris and are now marching toward the village.

The Syrian Observatory for Human Rights reported that troops are advancing under the cover of attacks by warplanes and helicopter gunships.

Syrian troops have been on the offensive in eastern Damascus for weeks and the violence has left nearly 1,000 people dead.