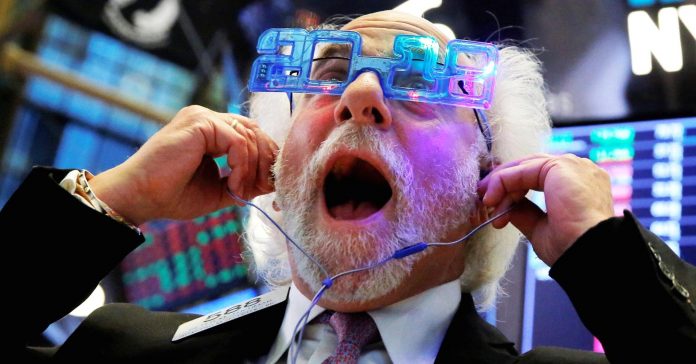 Stocks could ride a tailwind into 2018, bolstered by the best annual gains in four years and the promise of a generous earnings boost from corporate tax cuts.

With the holidays over, it’s time to get back to work quickly in the four-day week. December’s employment report looms Friday as the first major economic report of the year. There are also ISM manufacturing and monthly vehicle sales data on Wednesday.

The minutes from the Fed’s December meeting will also be released Wednesday afternoon, and that could provide some important clues as to Fed thinking on inflation and interest rates. The Fed has forecast three rate hikes for 2018, and some economists are now expecting four. Inflation, which has been lagging the Fed’s target, could be the deciding factor in how aggressive the Fed will be.

“Barring any surprises, I’m hoping for new money for the new month and the new year,” said Art Cashin, director of floor operations at UBS. He said he’s also watching the first two trading days of the year, to see if they are positive. If they are and the S&P 500 is higher when taken together with the past week’s performance, that would be a positive “Santa rally” period. The Santa rally period is the last five trading days of the year and the first two days of the new year, and if the market is higher, the odds are better for a positive year.

Market milestones for 2017 include a return to higher oil prices, with West Texas Intermediate futures closing Friday above $60 per barrel, for the first time since June 2015. That has helped drive a more than 6 percent gain for energy stocks in the past month, even though the sector was down 3.8 percent for the year. The best performing sector was tech, up 37 percent for the year.

The dollar continued its yearlong slide in Friday trading, with the dollar index ending the year down 9.7 percent, its worst performance since 2003.

Meanwhile, the 10-year Treasury yield was at 2.409 Friday afternoon, just slightly under the 2.43 percent level where it started the year. The 2-year yield meanwhile rose from 1.19 percent at the start of year to 1.88. The two yields are getting closer together, or flattening, and are now at the “flattest” in a decade. Some investors worry that’s a sign of economic weakness ahead.

Washington will also be a focus in January as it now gets down to business on spending issues, after the White House and Congress delivered a big tax cut package reducing corporate taxes to 21 percent from 35 percent, just before the holidays. But in 2018, the political scene promises to be more difficult, with potential fights over the debt ceiling and other issues ahead of key midterm elections.

Dan Clifton, head of policy research at Strategas said there are other issues that could also emerge early in the new year. “Goodbye tax, hello trade. That’s the start of it, right there,” he said, with news on the administration’s review of potential steel and aluminum tariffs expected in January.

“I’m just outlining that there’s a little bit of risk now,” he said. The administration could decide tariffs are warranted on aluminum for national security reasons. “This is a brush fire, not a forest fire.”

Some strategists believe there are good odds that the negotiations on the North American Free Trade Agreement could fail, threatening the trade agreement. NAFTA is being renegotiated by the U.S., Canada and Mexico.

Traders have been concerned about Trump’s potential to be protectionist, and whether he would really take action.

“There’s a good chance he’s going to get out there and poke someone in the nose,” said Cashin.