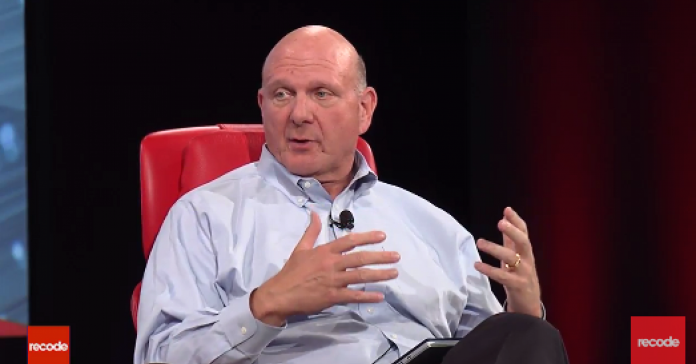 Los Angeles Clippers owner and former Microsoft CEO Steve Ballmer on Tuesday said that under his leadership Microsoft didn’t do enough to develop new capabilities in hardware. The comments come after Microsoft devices like the Surface Studio and Surface Book have been well received under Ballmer’s successor, Satya Nadella.

Microsoft did develop new capabilities in cloud services under his reign, Ballmer told Recode’s Kara Swisher and Kurt Wagner at Recode’s Code Conference in Rancho Palos Verdes, California, on Tuesday. But when it comes to hardware, the company was not as proactive.

“Companies get successful with an idea, with talent around the idea and with capability as a company to execute on the idea. It turns out if you want to have a second idea that is different than the first, you may need new talent, but you also need new capability. And you don’t get new capability overnight,” Ballmer said.

“So if you’re lucky enough to invent the first thing and the second thing before nobody else does, then you can build new capability. But I think I was too slow, in cases, to recognize the need for new capability. And particularly in hardware. I wish we’d built the capability to be a world-class hardware company, because one of the new expressions of software is essentially the hardware, and I think we came to that later than I think the company should have built that under my leadership should have built that capability earlier than we did.”

During Ballmer’s tenure — from 2000 to 2014 — Microsoft did introduce the Windows Phone platform, bringing the core operating system into the mobile age, and bought Nokia to try and kickstart a mobile handset business in 2013. However, the Windows Phone platform never took off, and the company has since written down the value of the Nokia purchase and essentially exited the phone business.

The company also unveiled the Surface convertible tablet. That product stumbled early on — in 2013 Microsoft made a $900 million write-down for the Surface RT — but it has recovered with the release of new versions.

With Ballmer as CEO, Microsoft grew its enterprise business from non-existent to about $20 billion in revenue per year, while maintaining high profits on the company’s traditional cash cows, Windows and Office.

But Apple and Alphabet‘s Google ended up dominating the mobile market, and Amazon is now making strong strides in hardware with its Echo home assistant device.

But the company has since developed that new hardware capability under Nadella, Ballmer said.