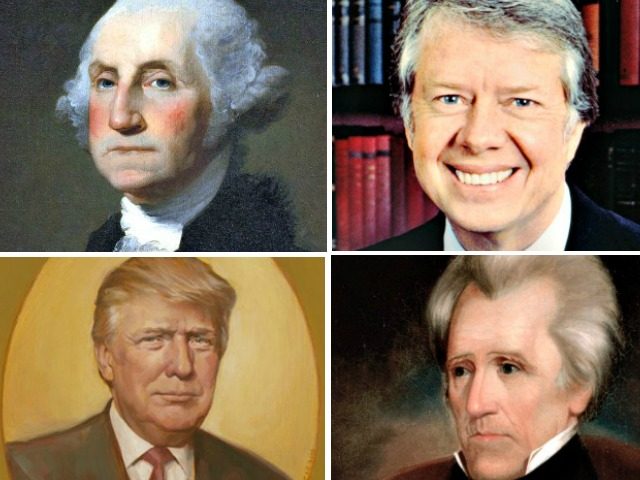 It is tradition, following the election of the president of the United States, that his official portrait, that of the Vice President, and those of cabinet members in various agencies are installed, replacing the portraits of the outgoing administration.

But at the State Department and at embassies around the world that apparently has yet to take place, more than four months after President Donald Trump and Vice President Mike Pence were inaugurated.

Although it is unknown why this is the case, officials at the State Department have confirmed to Breitbart News that the walls are bare for now — including no portrait in place of Secretary of State Rex Tillerson.

But a report from Fox News in March reveals some of the bureaucratic issues that could be stalling portrait installations.

“A dispute at a Florida VA medical facility could foretell the coming of widespread bureaucratic battles when thousands of copies of President Trump’s official portrait are sent out to be displayed in federal facilities around the nation,” Fox reported.

“The portraits, in addition to ones of Vice President Mike Pence and various cabinet officials, will replace those of their predecessors, as dictated by tradition,” Fox reported. “But to some in the politically polarized bureaucracy, the prospect of President Trump’s likeness watching over them is already causing problems.”

Rep. Brian Mast (R-FL) hung unofficial portraits of Trump and VA Administrator Dr. David Shulkin in a VA medical center in his West Palm Beach district and they were almost instantly taken down.

“I insisted that I would like to see them hung,” Mast told Fox News in an email. “The information desk called for a maintenance person who was seen helping me hang it.”

Fox reported that it is up to the General Services Administration’s publishing office to pass around the portraits and the agency had not said when the official portraits would go out  — back in March.

“Mast, a U.S. Army veteran who lost both legs to an IED in Afghanistan, felt strongly that the frames already emptied of portraits of President Obama and former VA Secretary Robert McDonald should be occupied immediately and brought his own photos of Trump and VA Administrator Shulkin,” Fox reported.