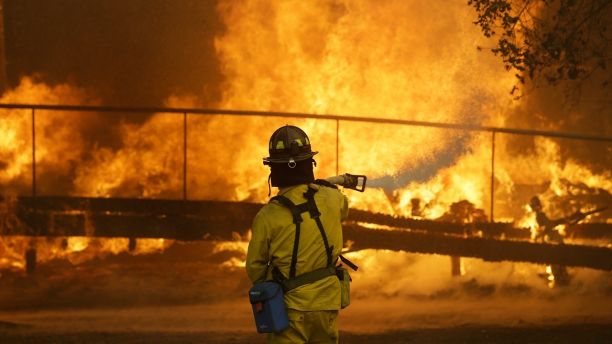 As of Thursday morning, the wind-whipped fire, which is the biggest blaze in California’s history since detailed record-keeping began in 1932, was 89 percent contained.

The massive blaze started on Dec. 4 about 60 miles northwest of downtown Los Angeles and caused at least 50,000 people to evacuate, destroyed 1,063 structures and scorched roughly 281,620 acres.

The Thomas Fire has very little active heat at this time and no forward progress of the fire is expected, the Los Padres National Forest, which is now tracking the fire, said in a statement.

Vistors are now welcome back to Santa Barbara, Ventura and surrounding areas — just days after authorities lifted all evacuation orders in Santa Barbara County and portions of Ventura County on Dec. 21.

The cause of the fire is currently unknown.

One firefighter died while trying to combat the fire in Southern California, authorities said on Dec. 14. Cory Iverson, 32, was an engineer based in San Diego. He left behind a pregnant wife and a 2-year-old daughter.

Iverson, who died of burns and smoke inhalation, had been with the California Department of Forestry and Fire Protection since 2009.

Iverson’s wildfire-related death was not the first.

Authorities confirmed the death of a 70-year-old woman on Dec. 8. Virginia Pesola was reportedly killed in a car crash along an evacuation route on Dec. 6. Her death was the first connected to the six wildfires that were in the region.

In addition, one unnamed firefighter has reportedly been injured and three other people were burned, the Los Angeles Times reported.

President Trump tweeted about the wildfires on Dec. 6.

“Our thoughts and prayers are with everyone in the path of California’s wildfires,” the president tweeted. “I encourage everyone to heed the advice and orders of local and state officials. THANK YOU to all First Responders for your incredible work!”

In light of the Thomas Fire and others, here’s what you need to know about California wildfires.

How do the fires start?

Officials are currently unsure what sparked the wildfires in Southern California.

While throwing a cigarette butt out of a window is usually not enough to spark a fire, Peterson said, other simple tasks — like mowing the lawn or parking a car on dry grass — can.

For instance, if a rock hits a lawn mower’s metal blades, that’s usually enough friction to create a spark that can ultimately start a fire, Scott McLean, an information officer at the California Department of Forestry and Fire Protection, or Cal Fire, told Fox News. And the heat from a car’s catalytic converter, a device that’s located underneath that controls its exhaust emissions, can reach up to 1,200 degrees Fahrenheit — enough heat to create a fire if the car is parked over dry, flammable grass.

“It only takes one spark to start a fire,” McLean said.

Another common source of wildfires are utility wires, Peterson said. On a windy day, these wires can be knocked over, land on dry vegetation and ultimately ignite a fire.

Wildfires are a “perfectly natural, normal phenomenon,” Peterson said. But as urban areas continue to expand into wildland areas, the risk of wildfires will also continue to grow.

“We cannot stop them. We can maybe do things to reduce their severity, like removing as much dead vegetation that we can, but they will continue to occur,” he added.

How are wildfires stopped?

All wildfires can bring mass destruction. But the way each fire is stopped varies, McLean said.

In other words, “the different vegetation and different scenarios up and down the state” impact how each fire is handled.

“You don’t just throw resources at a wildfire,” he said. “It’s like a battle — you have to think what will be the most effective.”

Cal Fire usually depends on a mix of bulldozers, fire engines, inmate crews, and helicopters or airplanes, which disperse things like fire retardant, to stop wildfires.

Using containment lines, or large areas where a bulldozer cuts away vegetation to the point where only dirt remains, is very common, he said. But this isn’t always an accessible option.

“‘What would increase the fire’s speed, what would slow it down?'” he asked. “Helicopter and airplanes are ineffective with winds over 30 miles an hour, and bulldozers can’t always get in there.”

Strong wind gusts also cause problems when putting out or controlling wildfires, he said. Regional atmospheric patterns that develop in the fall create dry, hot wind gusts that can sometimes reach 80 miles per hour. These winds can create so-called “spot fires” — which is when an ember from the main wildfire gets blown into a nearby bush or field, ultimately creating a second fire.

Indeed, “the thing that’s really challenging here is the embers, which can float one or two miles and jump across fire breaks,” Peterson said. “That’s why residential areas are so vulnerable.”

“There is so much energy and so much intensity that we cannot stop them with conventional means,” Peterson said. “In these fires, we have to allow them to burn until there’s a period of high humidity and rain that helps reduce the temperature of fire enough to control it.”

But rain can also create muddy conditions for bulldozers and fire crews which impacts how they can combat the blaze.

Peterson said that firefighters work to “steer” the fire, pushing it toward the ocean, highway or a steep, rocky area where there is less vegetation. This usually helps to stop or slow down the wildfire. They also use aerial and satellite photos to “work with the landscape” and keep an eye on which direction the wind is coming from, he said.

As for the Thomas Fire, however, McLean said resident safety comes first — hence the evacuation that first took place last week. He said Cal Fire is expecting more resources to come to the Ventura County area, adding that “several strategies and tactics are in place” to stop or control it.

“It’s a case by case basis, and it’s extremely fluid,” he said.

Why have California’s wildfires been so destructive recently?

McLean explained that California has faced a significant drought over the past five years, which created a lot of dead vegetation across the state. Like other mediterranean climates, wintertime brings rain, which fills up water reserves and helps new vegetation grow. California also had a record amount of rainfall in the spring of 2017. But the summer’s heat dried out that new growth, and, combined with the autumn winds, means “a lot of fuel was created for wildfires,” he said.

“These wildfires in Southern California are unlike anywhere else in the West,” Peterson said. And this year in particular, that’s primarily because of the Santa Ana winds.

Indeed, “the fires that occur in Southern California in the fall and winter are unique,” Peterson said.

While most of the wind cycles across the U.S. blow off of the Pacific Ocean and move east, the Santa Ana winds blow off the desert in Arizona and move west toward California. These hot, dry winds, which can reach 50 miles per hour or more, along with warm weather and dead vegetation, is the perfect concoction for severe wildfires.

“This [the Santa Ana winds] usually happens to some extent every year, but, like all natural phenomena, happens more severely some years than others,” he said. One of the more severe years has been 2017.

Between the winds and the lightning storms, close to 10 million acres in the West have burned in 2017 alone, Peterson said.

McLean said there are millions of dead trees in California — but those primarily serve as potential fuel for wildfires to blaze across the northern part of the state. In Southern California, on the other hand, smaller fuels — like chaparral, which is a shrub-like plant with fine stems and leaves — propel the wildfires.

“We’re not dealing much with forest in Southern California, we’re dealing more with chaparral — and that gets even hotter than a forest fire,” Peterson said.

“There’s a long road ahead of us. The fires we’ve dealt with recently — like the Thomas Fire — are all indicators of what we’re having to deal with in California for the next few years,” McLean added.

“Rains are not a cure all with one winter — it will take several years of winters to get moisture back into plants and reservoirs.”

What is the impact on wine, entertainment and wildlife? 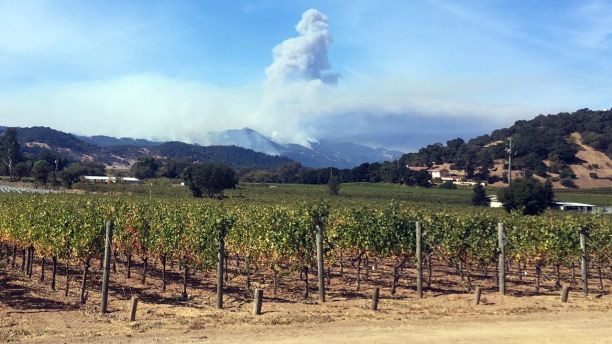 The wine industry can be affected by wildfires in California.

Wildfires could also impact the state’s wine industry from an economic standpoint, wine experts previously told Fox News. The California wine industry generates $57.6 billion in annual economic activity in the state and $114 billion in the country, according to statistics from the Wine Institute, a California-based public policy organization.

About 325,000 Californians are employed by the wine industry in California. The industry also contributes $17.2 billion in wages annually in the state.

Additionally, it generates $7.2 billion in tourism expenditures in California.

One of the biggest revenue generators in the West are “recreational activities on public lands,” Peterson said — such as hiking, skiing or sightseeing.

“Businesses shut down, and smaller communities who depend on tourism are greatly impacted,” Peterson said.

As for wildlife, most animals can either fly or run away from the wildfires, while others can burrow underground. Peterson said that wildfires are actually a good thing for deer, elk, Bark Beetles and some types of vegetation. But for other animals — like the Spotted Owl and the Lynx, for example — wildfires are harmful, often destroying their habitats.

“There’s always going to be winners and losers in wildfires,” Peterson said.

Additionally, the smoke from wildfires is hard on people who have respiratory problems. Elderly people and children are typically impacted by the smoke.

Peterson recalled a time that there was so much smoke in the air from a wildfire it was difficult to talk.

As for the entertainment industry, the Hollywood Reporter reported that HBO suspended its second season of “Westworld” due to a 200-acre brush fire that broke out near where the show was filming.