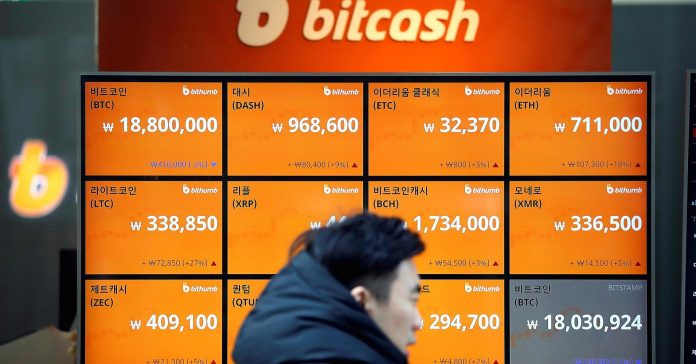 He said that many students were bringing laptops to class to track the movements of their investments and participate in actual trading. “Even when professors are giving lectures right in front of them,” he said.

Younger investors have especially gravitated toward so-called “altcoins”, or virtual currencies other than bitcoin, which often trade at much lower values, analysts say.

“Since young people are more mobile-friendly, they can actually make more out of altcoin investments as long as they are able to discriminate gems from pebbles,” said Kim Jin-hwa, one of the leaders of the Korea Blockchain Industry Association, an association of 14 virtual currency exchanges.

Iota, one of the fast-gaining altcoins, was traded at $0.82 in late November, but now stands at $3.89, a gain of 374.4 percent, according to Coinmarketcap.com. Energo (TSL), another type of altcoin, gained 400 percent during the same period.

Some young investors say they don’t sleep until after 2 a.m., when there is a lull in the cryptocurrency markets as investors in places like South Korea and Japan log off.

Members of the club say they call each other to make important decisions together, and see information sharing as key to navigating the volatile cryptocurrency markets.

“I literally knew nothing about cryptocurrencies or the economy,” said Lee Ji-woo, a 22-year-old sports industry major. “Everyone here has taught me a lot.”

It’s now emboldened her to dream of a different future.

“I can have two jobs maybe, one as an athlete and another as an investor,” she said.

“Whenever they go onto social network services, they are easily exposed to so many examples of young people around their age earning huge money,” he said.

But some in South Korea’s financial establishment say those hopes may be unfounded.

Kim Yong-beom, vice chairman of the Financial Services Commission, said Monday that the only reason prices were going up was because each investor expected the next buyer down the line to pay a higher price. “That really is a Ponzi scheme,” he said.