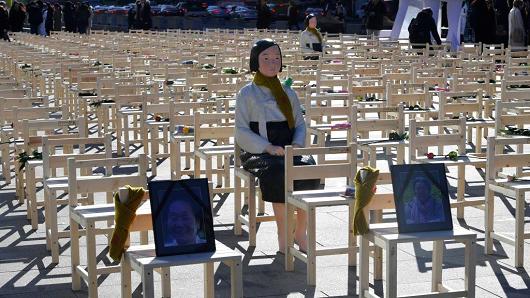 A statue of a ‘comfort woman’ is displayed in an installation of empty chairs set up in central Seoul to commemorate the death of eight former sex slaves.

South Korean President Moon Jae-in said on Thursday that a 2015 agreement with Japan over South Korean “comfort women” was seriously flawed and urged follow-up measures to resolve the contentious issue.

South Korea on Wednesday said the 2015 deal with Japan over “comfort women” forced to work in Japan’s wartime military brothels failed to meet the victims’ needs, throwing ties into doubt as both countries seek to rein in North Korea.

“The agreement cannot solve the comfort women issue,” Moon said, calling the deal a “political agreement that excludes victims and the public” and violates general principles in international society concerning resolution of historical issues, according to a Blue House statement.

Under the 2015 deal, endorsed by Moon’s predecessor and Japanese Prime Minister Shinzo Abe, Japan apologized to former comfort women and provided 1 billion yen ($8.8 million) to a fund to help them.

The two governments had agreed the issue would be “irreversibly resolved” if both fulfilled their obligations.

Japan said on Wednesday any attempt by South Korea to revise the 2015 deal would make relations “unmanageable,” with Japanese Foreign Minister Taro Kono saying the settlement had resulted from “legitimate negotiations.”

Despite the divisive issue, Moon pledged on Thursday to normalise diplomatic relations with Japan and work toward “future-oriented cooperation” with the neighbouring country.