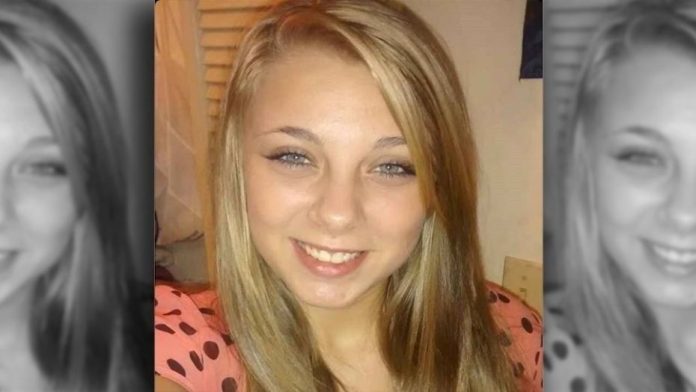 Kaylee Muthart speaks out on her drug abuse and what led her to gouge her eyes out last month.

A South Carolina woman who gouged her eyes out in public while in a drug-induced high said she believed the drugs were bringing her closer to God.

Kaylee Muthart, 20, of Anderson, SC, opened up to Cosmopolitan magazine about how she went from a straight-A student occasionally drinking and smoking marijuana to having meth and ecstasy on a regular basis.

She said it all began last summer when she smoked marijuana laced with a narcotic that she believes may have been cocaine or meth. Following the incident, she left school and her job because she felt she was betrayed by the friend who gave her the laced substance.

Soon after Muthart said her relationship with her boyfriend of two years “began to deteriorate” and she smoked marijuana and took Xanax to cope. Their breakup led to a mental breakdown and a bipolar disorder diagnosis.

SOUTH CAROLINA WOMAN SEEN OUTSIDE CHURCH GOUGING OUT HER EYES WITH HER OWN HANDS, POLICE SAY

Muthart said she eventually found a new job but could not shake off the thoughts of how the laced marijuana made her feel. It was those feelings that made her decide to smoke meth last August.

She lost her job because she was “too embarrassed” to go to work after she picked at her face following her trip on the narcotic.

“While on ecstasy, I studied the Bible,” Muthart said. “I misinterpreted a lot of it. I convinced myself that meth would bring me even closer to God.”

During Thanksgiving, her mother Katy Tompkins tried to intervene and even recorded a phone conversation between the two of them to get a court order that would force her daughter into a rehab center.

However, Muthart bought meth from her dealer. She recalled that she injected “a larger dose [of meth] that I’d ever used before.”

This was on Feb. 6, 2018. That day, while hallucinating from the large dose, Muthart recalled that she thought “someone had to sacrifice something important to the world, and that person was me.”

“I thought everything would end abruptly, and everyone would die, if I didn’t tear out my eyes immediately,” she said.” I don’t know how I came to that conclusion, but I felt it was, without doubt, the right, rational thing to do immediately.”

MOTHER OF WOMAN, 20, WHO GOUGED OUT EYES SPEAKS ON HAZARDS OF ILLEGAL DRUGS

Muthart said the man she had been staying with, who she did not identify but said had a biblical name, was driving by and asked her a question. She said she felt that the encounter was her sign.

What happened next has left Muthart completely blind.

“So I pushed my thumb, pointer, and middle finger into each eye. I gripped each eyeball, twisted, and pulled until each eye popped out of the socket — it felt like a massive struggle, the hardest thing I ever had to do,” she said. “Because I could no longer see, I don’t know if there was blood. But I know the drugs numbed the pain. I’m pretty sure I would have tried to claw right into my brain if a pastor hadn’t heard me screaming, ‘I want to see the light!’ — which I don’t recall saying — and restrained me.”

She continued: “He later said, when he found me, that I was holding my eyeballs in my hands. I had squished them, although they were somehow still attached to my head.”

Across the street, terrified churchgoers from the South Main Chapel and Mercy Center watched on.

Muthart said that during the incident her mother was traveling to the courthouse to get her committed to the rehabilitation center but “she was too late.”

Following her surgery to save her optic nerves, Muthart said she “knew” she was blind and suffered from bad headaches. She said she refused powerful painkillers despite her pain and even asked visitors to describe how she looked now that she could not see.

Since then, Muthart has been clean. She has been adapting to her new lifestyle and hoped to go back to school for marine biology. She also plans to attend 90 Narcotics Anonymous meetings and hopes to raise enough money on GoFundMe for a seeing-eye dog.

Despite the situation, Muthart said she is “happier now than she was before all this happened.”

“I’d rather be blind than dependent on drugs,” she said. “It took losing my sight to get me back on the right path, but from the bottom of my heart, I’m so glad I’m here.”