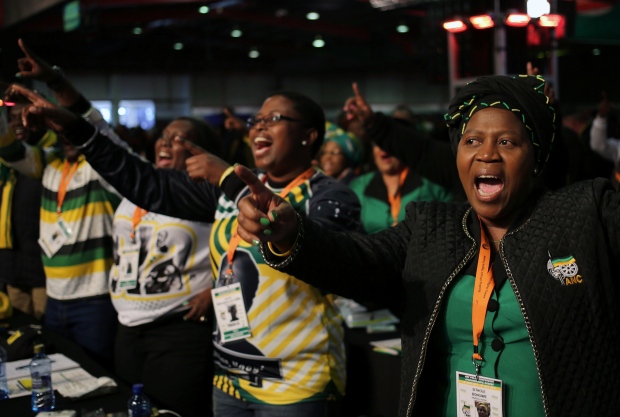 South African President Jacob Zuma on Friday acknowledged corruption and other “negative tendencies” in the ruling party that has led since the end of apartheid in 1994, but sharply criticized opposition groups and former supporters who want the scandal-ridden president to resign.

Zuma spoke at the opening of a major policy conference in Johannesburg at which the African National Congress, which rose to prominence generations ago as the main movement against white minority rule, sought to project unity. However, some veterans of the struggle against apartheid boycotted the event because of concerns about alleged state corruption and mismanagement on Zuma’s watch.

Zuma said the ANC has done much to expand democracy and improve the lives of South Africans, though he admitted that corruption, factionalism and other problems were hurting the party.

“To restore and maintain its character, the ANC needs to cleanse itself of the negative tendencies which have crept in over the years,” said Zuma, who declared in parliament last week that he was doing a good job despite high unemployment, an economic recession and other challenges.

Critics partly link the economic problems to the political uncertainty surrounding Zuma, who fired Pravin Gordhan, the widely respected finance minister, in a Cabinet reshuffle in March. Two agencies, Fitch and Standard & Poor’s, responded to the dismissal by lowering South Africa’s credit rating to below investment grade, or junk status.

The ruling party is expected to replace Zuma as ANC president at a meeting in December. His deputy, Cyril Ramaphosa, and Nkosazana Dlamini-Zuma, the president’s former wife and former head of the African Union Commission, are considered leading candidates. While Zuma’s term as president of the nation continues until the 2019 elections, there are calls from within the ruling party for him to quit and allow the ANC to shore up support before the vote.

Zuma on Friday criticized opposition parties that have taken their grievances to court, saying the recourse to legal action was undermining South African democracy.

“You argue in parliament and then the opposition is defeated — they say, `OK, we are going to court,”‘ Zuma said. “Is that democracy?”

The president has said there have been seven motions of no confidence against him and that he expected more such efforts to oust him. The opposition went to court to try to get another motion conducted by secret ballot, which it believes could tip the balance against Zuma. The Constitutional Court ruled last week that it was up to the Speaker of parliament, a ruling party member and Zuma ally, to decide how the vote should be implemented.

Redistribution of land to blacks floated

Zuma also disparaged some ANC members who oppose him, saying they “are not as strong as they project themselves.”

Also at the conference, the man who replaced Gordhan as finance minister said South Africa may need outside financial assistance to get out of its economic spiral.

Zuma has admitted that the economy may not hit the forecast 1.3 per cent growth target set by his government, and urged political allies to discuss policies, including land redistribution, to revamp the economy.

Gigaba called for “radical solutions” — albeit within the constitution — to redistribute land to the country’s black majority.

Gigaba said South Africa, which has an unemployment rate close to 28 per cent, may need to get outside financial help.

“Should the main indicators continue to disappoint any further we may have to seek assistance from quarters we have thus far avoided,” Gigaba added, without elaborating.

Asked by Reuters if he was referring to the International Monetary Fund, Gigaba smiled and said “Any.”

The fund’s senior resident representative in South Africa Montfort Mlachila was not immediately available to comment.