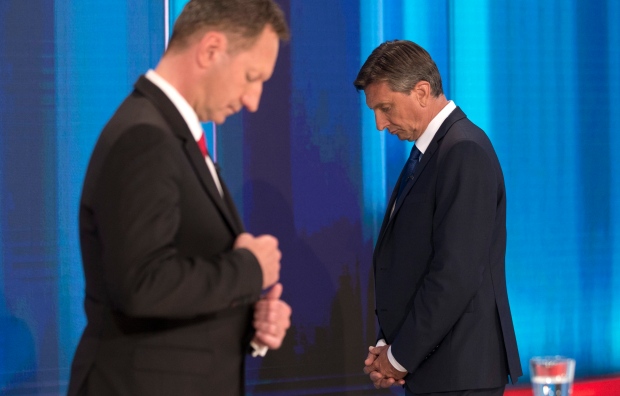 Slovenia’s President Borut Pahor has acknowledged that a run-off vote will be necessary after the first round of balloting in the country’s presidential election.

Pahor was seeking re-election in the vote on Sunday. The initial vote count gives him the lead, but without the majority of votes needed to win a second term outright.

With more than 90 per cent of the votes counted, Pahor had 47 per cent. His main opponent, Marjan Sarec, received around 25 per cent.

President incumbent Borut Pahor, right, and one of his opposing candidates Boris Popovic contemplate prior to a televised debate at Slovenia’s public TV in Ljubljana, Slovenia, on Thursday. (Darko Bandic/Associated Press)

Pahor says it appears a Nov. 12 run-off vote will be needed and he will “do my best to prove that I’m the best choice. I’m glad for the support that I got in the first round.”

Sarec is a former comedian who is the mayor of the northern town of Kamnik.