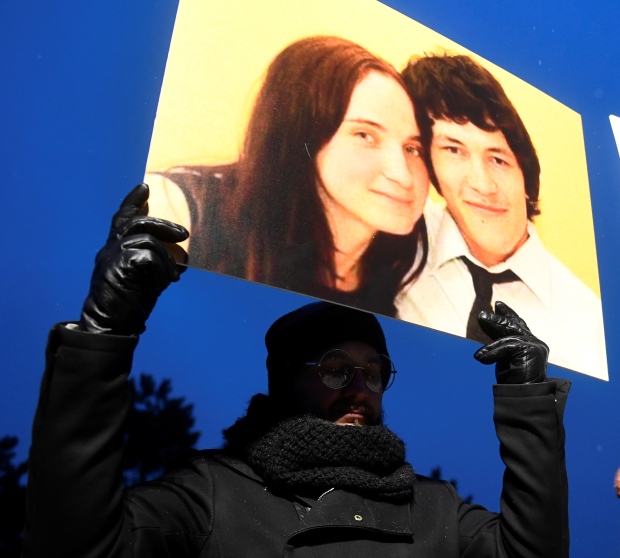 Slovak Interior Minister Robert Kalinak said on Monday he would resign, bowing to the demands of a junior coalition partner, as Prime Minister Robert Fico fights to save his government after mass protests following a journalist’s murder.

Fico is seeking to keep his three-party coalition together after the murder of investigative reporter Jan Kuciak shook the nation, stoked public anger over corruption and saw the biggest street protests in decades on Friday.

Organizers plan another protest this Friday.

The junior government party Most-Hid (Slovak for “bridge”), a centrist group representing the ethnic Hungarian minority in Slovakia, had demanded the prime minister dismiss Kalinak, Fico’s protege and a founding member of their Smer party.

Critics say Kalinak, who oversaw the police as interior minister, could not guarantee an independent investigation into the killing of Kuciak and his fiancée, Martina Kusnirova, in late February.

A participant in a protest holds a banner in honour of Kuciak and Kusnirova, in Bratislava, Slovakia, on March 2. (Radovan Stoklasa/Reuters)

Most-Hid’s leadership was meeting on Monday to decide its next move.

The party welcomed Kalinak’s resignation although its leader, Bela Bugar, declined to comment when asked whether it would be enough to remain in the coalition.

“The national council always decides… In such cases it has the final word,” Bugar told reporters.

Failure to keep Most-Hid’s support could spell the end of Fico’s government. The leader of the third coalition member, the Slovak National Party (SNS), said his party would want an early election if the coalition loses its parliamentary majority.

Fico’s coalition holds 78 of the 150 seats in parliament. If the coalition holds, it will face a no-confidence vote after opposition parties filed a motion on Monday. They need 76 votes to topple the government. No date has yet been set for the vote. 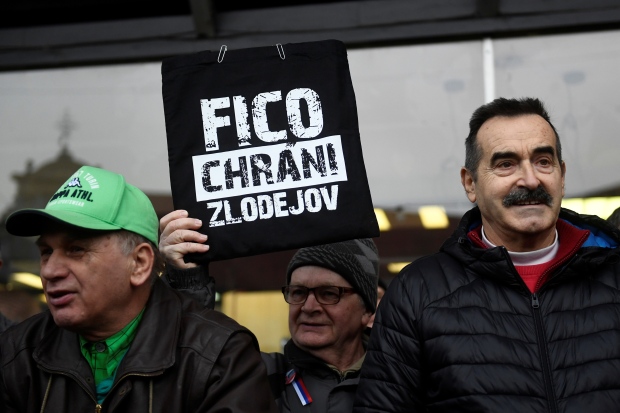 A demonstrator holds a placard reading: “Fico protects thieves” during a protest in reaction to the murders of Kuciak and Kusnirova, in Bratislava on Friday. (Radovan Stoklasa/Reuters)

Fico’s Smer party has been ahead in opinion polls, with 25.5 per cent support in Focus agency’s January survey, almost double the opposition SaS party in second place.

Most-Hid is polling at 5.7 per cent, the lowest among the eight parties that would win seats, according to Focus’s poll.

Kalinak’s exit is a blow to Fico, the country’s longest-serving leader, in power for 10 of the last 12 years.

“It’s important for stability to be maintained, therefore I decided to resign the post of deputy prime minister and interior minister,” Kalinak said. “I think I will do more for the investigators not to be disturbed in their work if I resign,” he said.

Kuciak focused on tax fraud involving politically-connected businessmen. Before he was shot dead, he had been investigating Italian businessmen in Slovakia with suspected mafia links.

One of the Italians Kuciak wrote about had co-owned firms with two Slovaks who went on to work in Fico’s office. Both have resigned but deny links to the murder. Their Italian former business partner denies connections to the mafia.

No one has been charged over the killings.

In the past, Kuciak had also written about a real estate developer investigated for tax fraud who had business ties to Kalinak. Both have denied wrongdoing.

It was unclear whether Kalinak’s resignation will be enough for Most-Hid.

Many of its lawmakers were angered last week when Fico began referring to what the party called “conspiracy theories”. Echoing Hungarian Prime Minister Viktor Orban, Fico has accused foreign forces of trying to destabilise Slovakia and has questioned the president’s meetings with financier George Soros in New York last year. 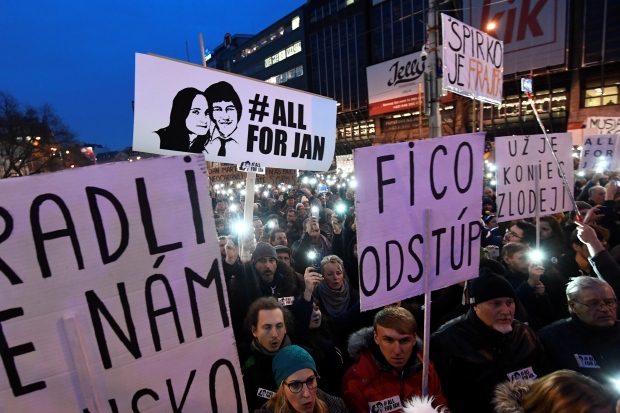 Slovakia has prospered in the past decade, joining the eurozone and growing at one of the fastest rates in Europe, but many see Fico as having failed to fight graft and cronyism.

In the largest demonstrations since the fall of communism in 1989, an estimated 50,000 people rallied in the capital Bratislava on Friday and thousands more in other cities, demanding resignations and a thorough investigation of Kuciak’s death.