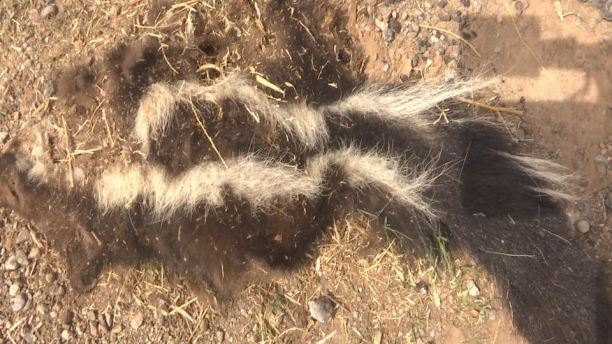 Nature’s power doesn’t always come in the form of snowstorms and hurricanes. Sometimes it’s a lot smaller, and can really stink.

Hagerman, New Mexico is currently dealing with a yearly skunk invasion. The small black and white mephitidae’s are causing a big problem for residents of this small town who have found them, in alarming numbers, under their homes and in their backyards.

While skunks aren’t frequently seen in Hagerman because they are nocturnal, they can create horrible smells in homes and buildings where people are trying to sleep and work.

A smushed skunk on the side of the road in Hagerman, New Mexico. Many skunks can be found dead on the road as they run around at night and into traffic.

“It’s quite odorful, it’s a rude awakening at times,” said Cathey Haley, a Hagerman resident who has had a skunk living underneath her home. “When a skunk lets go right underneath your house or right under your bed, it makes for a very interesting night of sleep, or lack thereof.”

Skunks were once rare in in Hagerman, a town of about 1,200 residents. But now skunk carcasses are strewn all over the town’s streets. Drive down any street and there are one or two dead skunks on roadways. One street was sprinkled with four lifeless skunks.

“We’re finding a bunch of dead ones on the road almost nightly now in the spring and summertime. In the winter not so much,” said Officer Adam Chavez of the Hagerman Police Department.

The skunks are a problem because the critters could bite pets and infect them with rabies.

Hagerman police have received eight calls for skunks so far this year, compared to just two all of last year. Police said the problem normally arrives in the spring, but has started in the late winter this year because skunks are coming out of their idle stage earlier.

The police set traps to catch the skunks, and release them outside of town. However, the traps haven’t been working as planned this year. So far, they’ve captured 12 cats, four dogs and a domesticated rabbit – but no skunks. 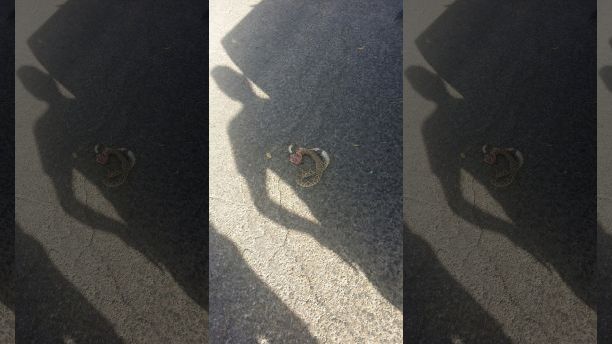 The rattlesnake found at a middle school playground while children were playing.

“It is helping us get control of our animals-at-large issue also,” said Hagerman Police Chief Rachelle Bateman.

There are stray and loose cats and dogs running around all over Hagerman. The police entered a partnership with a local animal shelter to help the animals. Cats are spayed or neutered and relocated, dogs are given back to their owners or put up for adoption.

In addition to skunks, Hagerman is also home to many rattlesnakes, which can wander into town.

“As it gets cold at night and heats up during the day, they tend to be out on the asphalt to try and warm up,” said Chavez.

Last year, police received nine calls for the deadly reptile. One was found at the high school football field, another at the middle school playground while children were playing.

Chavez said for the safety of the officers and everyone around, they shoot the snakes.

“We don’t have the equipment to catch them safely, so usually the rattle snakes are destroyed on site,” said Chavez.

Ray Bogan is a Fox News multimedia reporter based in El Paso, Texas. Follow him on twitter: @RayBogan